The Devil Went Down to St. Louis 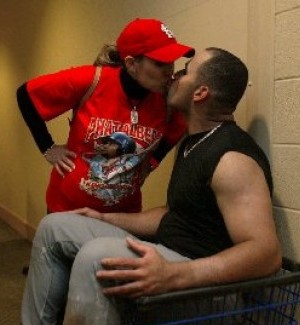 Sports create narratives. Really appealing ones — underdog stories, hard-work parables, rags-to-riches daydreams. But ultimately, sports teams are run by businessmen, not writers, and athletes are people with jobs first and heroes second (if at all).

Fans of the St. Louis Cardinals got a painful reminder of exactly that last week, when superstar first baseman Albert Pujols took his talents to the Los Angeles Angels for a 10-year, $254 million deal.

Cardinals fans are understandably pretty upset, and the possessiveness that fandom can generate is leading to some nasty comments about Prince Albert. His wife, Deidre Pujols, took to the airwaves of a Christian radio station (that she and her husband had helped to finance) to tell her side of the story.

“The reason I say I was angry with the Lord is because I felt like when we were at our weakest — both the Cardinals and our family — making this decision, and it just couldn’t get finished and done, I was like, ‘this is when God is going to step in.’ And it didn’t happen. And then when the news broke on Thursday morning after we had made our decision, I don’t think we anticipated the tsunami that came our way.”

Apparently staying in St. Louis just wasn’t in the divine plan, but according to Pujols, “God put [them] on a team called the Angels.” When the sports narrative fails, appeal to the god narrative. It’s foolproof! Pujols also claimed that the devil was deceiving Cardinals fans in order to destroy her family:

“In your walk of life you better [know] who is the author of persuasion and who is the author of grace,” Pujols said. “Because if the devil can persuade, which he has done here by misinforming and lack of information, he knows that then he can kill…or try to destroy us.”

If the presence of a bunch of loudmouth jerks were evidence for the devil, the Wrigley Field bleachers would be Hell.

Don’t get me wrong, I’m not defending obsessive or hostile fans. But currying sympathy by claiming that the devil is turning a fanbase against you just strikes me as over-the-top. In addition, by claiming “God’s will,” the Pujols’ abdicate responsibility for their decision, and not only that, they imply that the entire Cardinal Nation is in defiance of the Lord. Anyone smell bridges burning?