Review: Bang!: How We Came to Be

BANG!: How We Came To Be by Michael Rubino is a beautifully designed 62-page children’s book on how humans came into existence. We start at the “nothing,” before the Big Bang, and go all the way through single-celled amoebas, fish with feet, and apes standing up to full-fledged humans.

Each left-hand page is filled with simply gorgeous artwork on the subject described on the right-hand page. In this way, it is a lot like every other children’s book: many pictures and big letters. It explains the story of our evolution from start to present without too many details and with pictures that enhance our understanding. It would be a great conversation starter for you and your child, and it is a good way to begin to educate them on the theory of evolution. It gets their imaginations going and will help them counter with more than just a raspberry when their Creationist peers say: “So your granddad is a monkey, huh? Well, I come from God!” Your child will be able to explain to them how scientists believe humans and apes descended from a common ancestor instead of from a god. 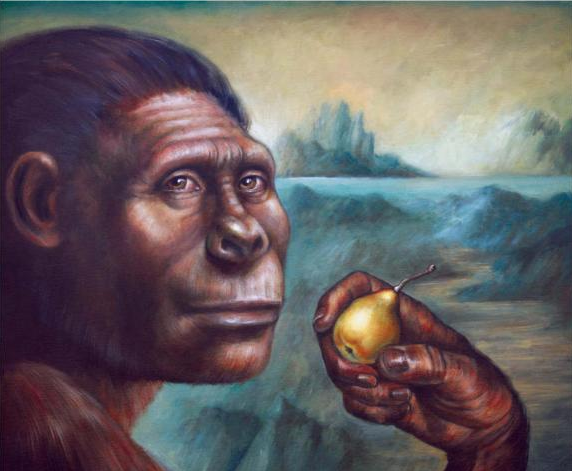 However… (You could feel the “but” coming, couldn’t you?)

This is a great little book, and it’s ideal for that curious seven-year-old running through the house, but there are a few things I need to tell you about.

For starters, while the layout of the book puts it somewhere between See Spot Run and Harry Potter, the language puts it somewhere between AP Biology and Evolutionary Biology 101. Seriously, what child knows words such as “whiplike flagellum,” “supercondensed,” “sedentary,” or “culminates”? The style of the language is also nowhere near See Spot Run. Take, for example, this sentence:

“Our tail, which had once been useful as a counterweight and helped us keep our balance in the trees, had by now become a cumbersome nuisance.”

A pretty sentence, but you see how this doesn’t exactly read like a book for the young-uns, right?

Another problem I have with the book is that it reads too much like an illustrated children’s Bible. The subject may be radically different, but the tone is the same. The language is dusty and flowery and lofty and there is a lot of certainty in this book; the author gives the story as fact.

The author focuses on the beauty and what might be described as the “forethought” of nature in the way it has produced us, as if it were all some grand plan to get us on this planet. That reeks of biblical thought, and it is also exactly my third problem with this book:

The book promotes the lie about evolution. The lie we tell our children to make evolution easier to understand. The lie we often tell ourselves:

More ambitious travelling seemed appealing, so we started to swim.

And so it was that as we pushed and pulled our way through the heavy vegetation of the shallow waters, some of us began to grow toes on our fleshy fins.

This is the lie that evolution is voluntary, as if we decided to swim, to grow lungs, to grow feet, to stand up. That is not how it works. We didn’t plan to grow toes just because it would make life more interesting. Some of us were freaks of nature, but it turned out we could use our freaky appendages to help us stay alive and have more offspring, so our freakishness became the norm. It was mostly dumb luck and coincidence that got us where we are today; nature is not a sentient force that plans for certain things to happen. But that doesn’t read as beautifully as the pompous words above, does it? 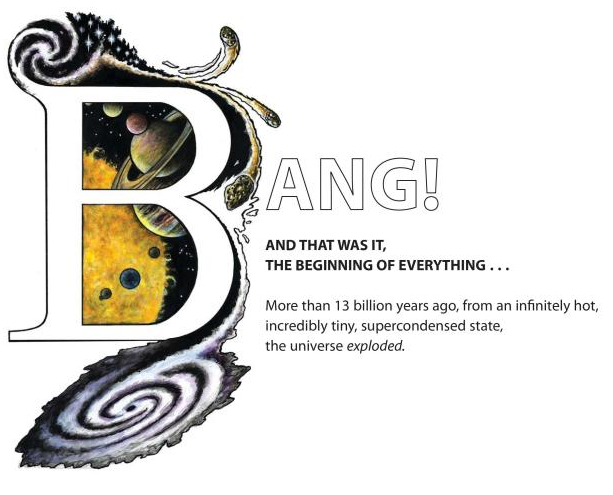 Overall, though, I think you should get this book. If you don’t have children, it still makes for a very pretty coffee table book. The pictures are wonderful, so it’s worth it just for the art. If you do have children, read this with them. Give commentary on how there is also a school of thought that says we stood up because we lived in and near water, which made it possible for the freaks with turned pelvises to still survive and have offspring. Explain how we still don’t really know why the dinosaurs disappeared, or how the first molecules became “organic.” Explain how it is okay that we don’t know and how that leads to more research and better knowledge.

This is a book that needs a lot of explanation, but it is also a great help when talking to your child about how we came to be. And who doesn’t enjoy a beautifully turned sentence every once in a while?