The brilliant writer, speaker, and thinker died tonight at the age of 62 after a tough battle with esophageal cancer. His final piece for Vanity Fair is as powerful as anything else he’s written.

If this is a surprise to anyone, it may be because we harbored some secret hope that he’d find a way to beat cancer into submission. Or somehow argue it out of his body.

While I’ve seen him from a distance at a conference or two over the years, I had a chance to talk to him in person about five years ago, just before the release of God Is Not Great, when he showed up to a hotel room party at The Amazing Meeting 5 and mingled with the guests. He was as blunt and hilarious as you would expect, managing to offend several people with a joke while making them laugh at the same time. 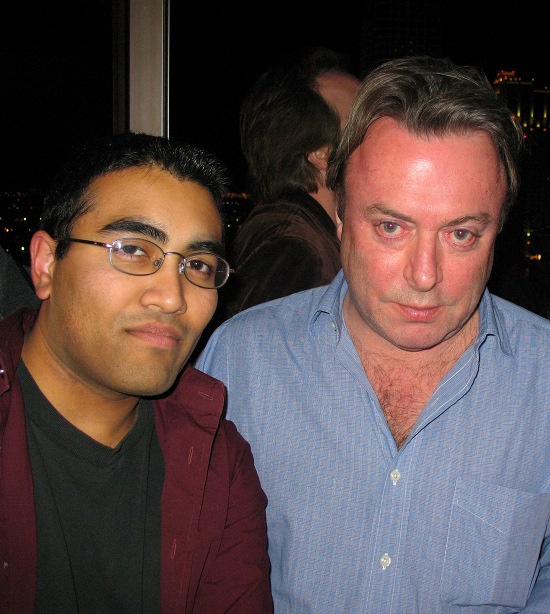 I remember asking him how his new book about religion would be any different from the ones by Richard Dawkins and Sam Harris.

His response was short and to the point: “It’s better.”

And, indeed, it was the only one of the New Atheist books to hit #1 on the New York Times bestsellers list.

He’s not in a “better place.” He’s not in hell, either. And he won’t ever be looking down from above. But we have something better than that: a legacy of Hitch that’s going to live on in perpetuity. Decades’ worth of books, collections of his articles, and videos of his lectures and interviews are everywhere. Here’s a man who will still influence people for years to come, giving them the arguments and confidence they need to finally leave their faith.

Raise a glass, everyone. Here’s to a man who did more to challenge faith and tip over sacred cows than just about anyone else.

December 16, 2011 Arkansas Superintendent Puts Up Nativity Scene in Public School
Browse Our Archives
What Are Your Thoughts?leave a comment