This is a guest post by Lisa. [Personal information has been removed.]

Raised in a conservative, orthodox Christian church, denial went with the territory. Along with evolution and dinosaurs, climate change fell into the camp of liberal lies.

For many, it is unfathomable that people still deny the existence of global climate change and the human contribution. Unfathomable — but true. In fact, the denial of climate change is still common enough that GOP candidates across the board appeal to it.

Mitt Romney has said that he’s “a skeptic on global warming science” and that we’ll figure out man’s actual contribution “10, 20, 50 years from now.”

I vividly remember sitting in a politics class years ago at the small, conservative Christian college I attended. The professor told us that the Kyoto Protocol was a socialist scheme. He told us that science couldn’t provide any evidence for the existence of climate change.

Many Christians deny the reality of climate change because God is supposed to take care of us. If we’re not running the show, then why do we need to do anything? Of course, this isn’t to say that every Christian denies climate change or is environmentally unfriendly. I may come from a religiously conservative family, but we were always recycling freaks by Midwest standards.

Still, the fact remains: Christianity tells followers to trust in God. The various ways this is acted on cross the spectrum, from prayer to refusing a child needed health care. And of course, somewhere in that spectrum is the denial of global climate change.

All this denial is interesting in light of the fact that science actually can prove the existence of climate change. A group of scientists in Iowa presented a statement on November 15th affirming the reality of global climate change and urging GOP candidates to present their policy responses.

What is even more interesting is that, according to a recent poll (PDF), it looks like more Christians are beginning to agree. 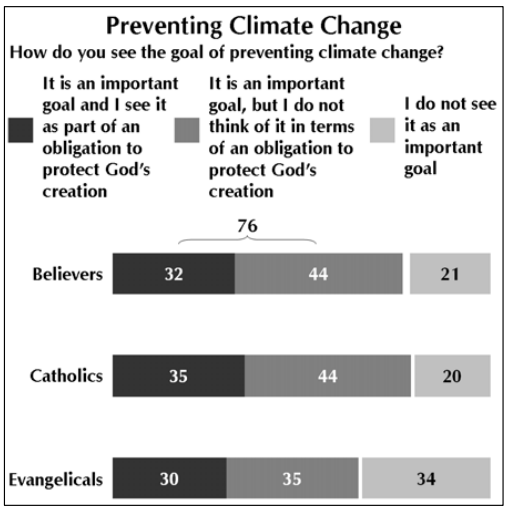 A new University of Maryland poll finds that 76 percent of Catholics and evangelicals support a global pact reducing the pollution that causes global warming, much like the one on the table in Durban, South Africa.

It’s doubtful that any of the candidates will soften their skeptical stance, but how much longer can evidence be denied?

December 13, 2011
Get the Prayer Out of the UGA Graduation
Next Post