Latinos and the Future of American Secularism December 12, 2011 Hemant Mehta

Latinos and the Future of American Secularism

This is a guest post by Juhem Navarro-Rivera. Juhem is a political scientist and Research Fellow at the Institute for the Study of Secularism in Society & Culture (ISSSC) and blogs about Latinos, Politics and Secularism at The LatiNone

Latinos are considered to be a very religious and socially conservative group. While the assumption is that most Latinos are Catholic, every once in a while there are reports of waves of Latino immigrants abandoning their traditional Catholicism as they get used to life in the U.S. The bulk of the attention is given to other Christian churches, particularly Pentecostal churches, which are considered to be receiving the lion’s share of former Catholic Latinos.

These assumptions about Latinos don’t hold up to scrutiny.

Last year, the Institute for the Study of Secularism in Society and Culture, which produces the oft-cited American Religious Identification Survey (ARIS), explored the changes in the religious identification of Latinos. The report, which I co-authored with my ISSSC colleagues Barry A. Kosmin and Ariela Keysar, shows that in just one generation (between 1990 and 2008) the percentage of Nones (people with no religious identification) among Latinos doubled from 6% to 12%. These proportions are comparable to ARIS findings in the general U.S. population, which went from 8% in 1990 to 15% in 2008. 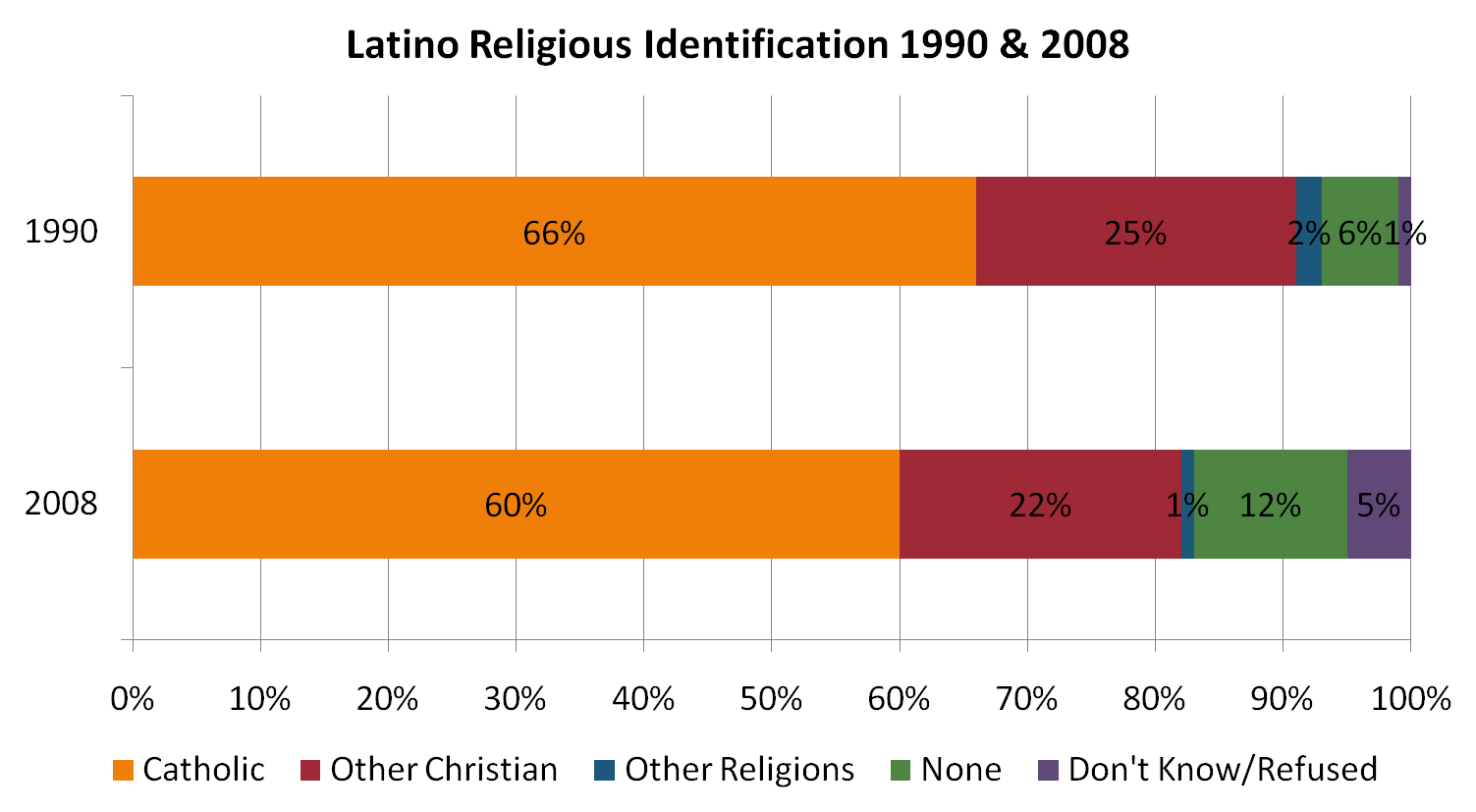 This growing secularity among Latinos was the subject of my talk on December 4at the Harvard Humanist Chaplaincy. My goal, then and now, is to explain how deep secularism runs in the Latino community and the important role of Latinos in the growth of American secularism over the last two decades.

These are several ways in which Latinos have contributed to the growing secularism in the U.S. “No religion” is the fastest-growing category in the Latino community since 1990, accounting for about a fifth of Latinos. Latino Nones are as likely as American Nones to identify as atheist or agnostic (11%) and 16% of atheists and agnostics in the U.S. are Latinos. Similarly to the American None population in general, Latino Nones are very young — over 40% are under the age of 30 — and well educated, with about a quarter reportedly having earned a college degree or higher.

The youth of Latino Nones suggests that secularism will increase among Latinos. Since Latinos are expected to become even a larger share of the U.S. population in the future, the future of American secularism is intrinsically linked to the increased secularity among Latinos.

The increasing secularism among Latinos also manifests itself in politics. For years, there’s been an expectation that the supposedly growing religious conservatism among Latinos will drive most of us to the Republican Party (most Latinos support Democratic candidates, including Barack Obama, who received 67% of the Latino vote in 2008). President Reagan used to say that Latinos were Republicans, they just didn’t know it. When President Bush received about 44% of the Latino vote in his reelection bid in 2004 many suggested that the Latino GOP wave was about to materialize.

As of 2011 the huge wave of religious Latino GOP voters has not materialized. The stereotype remains, though. The importance of religion for Latinos at the polls was the subject of a new survey by the Latino Decisions group. The study, released on December 8th, found that for a majority of Latinos — 55% to be precise — religion doesn’t play a major factor when voting for a particular candidate.

While this may come as a surprise to many in American politics, it is not a surprise to those who have witnessed and documented the increasing secularity among Latinos. As we approach the 2012 elections politicians must learn that to capture the future Latino vote, they’ll need to work harder than just inviting a couple of preachers. Most Latinos don’t vote as “guided” by their religion and many more are leaving religion altogether. It is time to stop writing about Latinos and religion in an way that reinforces old cliches and stereotypes and understand that our reality is more complicated.

December 12, 2011 Army-Navy Game Introed to Christian Battle Hymn
"No matter how whacked out an idea or conspiracy theory might be, you can find ..."
Mike Meredith Orthodox Christians in Cyprus Are Protesting ..."
"Thanks for the tip. It is dot org, not dot net. I am going to ..."
Rick O'Shea Preacher: I Won’t Pray for Biden Since ..."
""A year ago, he said he wouldn’t close his Tennessee church because it would mean ..."
Billlbo Christian Hate-Pastor Brags About Precaution-Free Church ..."
"You forgot the part where they say, "We're all in terrible danger! Let's split up!""
wannabe Christian Hate-Pastor Brags About Precaution-Free Church ..."
Browse Our Archives
What Are Your Thoughts?leave a comment