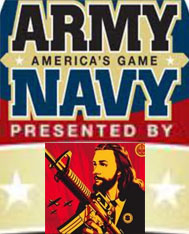 These verses served as the introduction to the 112th playing of the Army-Navy Game.  In case you aren’t familiar, make no mistake:  This game is considered one of the greatest rivalries in college sports.  The President, Vice President, and the top generals of the Army and Navy were in attendance.  The game is billed as “America’s Game.”  This is a window into the competitive spirit and professional teamwork of our nation’s military. These football players are the cadets of West Point and the midshipmen of Annapolis, augmenting their training as military officers with football physicality, tactics, competition, and teamwork.

The introduction featured cadets and midshipmen in uniform discussing the great dedication they show to the nation through their training.  The comments from these scholar/warrior/athletes of America was cut with scenes from both the cadet and midshipmen choirs fervently singing a song that promotes Christian crusading and judgment against the unfaithful.

It’s easy to overlook this as just a game, but it was watched by over 4 million households.  These households saw the pageantry of the Army-Navy rivalry and future officers of the nation mixed up with the emotion of Christian battle.  Maybe it was just a song.  Maybe those cadets singing that song were just mouthing the words and not thinking about the meaning.  However, the bounds of logic are stretched too far to imagine that military leaders failed to think deeply about the song chosen to jointly represent the future leaders of the Army, Navy, and Marines.  Those right-wing conspiracy theorists blaming Obama for a ‘war on religion’, should not fail to give the Commander In Chief personal credit for associating the Army-Navy game with an American Christian Crusade.

The cadet choir should be able to sing what it likes, including religious songs.  The Battle Hymn of the Republic is a historically patriotic song, hearkening back to our earlier, less religiously diverse and less tolerant society.  The game is technically a private, commercial enterprise.  This was just an introductory show on TV.  These are the defenses for what amounted to a blatant use of these young leaders, some of the most revered citizens of our nation, to promote the idea of America as a Christian Nation.

December 12, 2011
Latinos and the Future of American Secularism
Next Post