A few days ago, I wrote about how the InterVarsity Christian Fellowship (IVCF) group at the University of Buffalo was suspended after forcing their treasurer to resign because he was gay. (They said the homosexuality had nothing to do with it; rather, the issue was that the student no longer believed the Bible was 100% true.) The school had a non-discrimination policy when it came to campus groups and IVCF had violated that policy; hence, the suspension.

Now, the same issue is playing out at Tufts University. In fact, it was the top story in yesterday’s independent student newspaper: 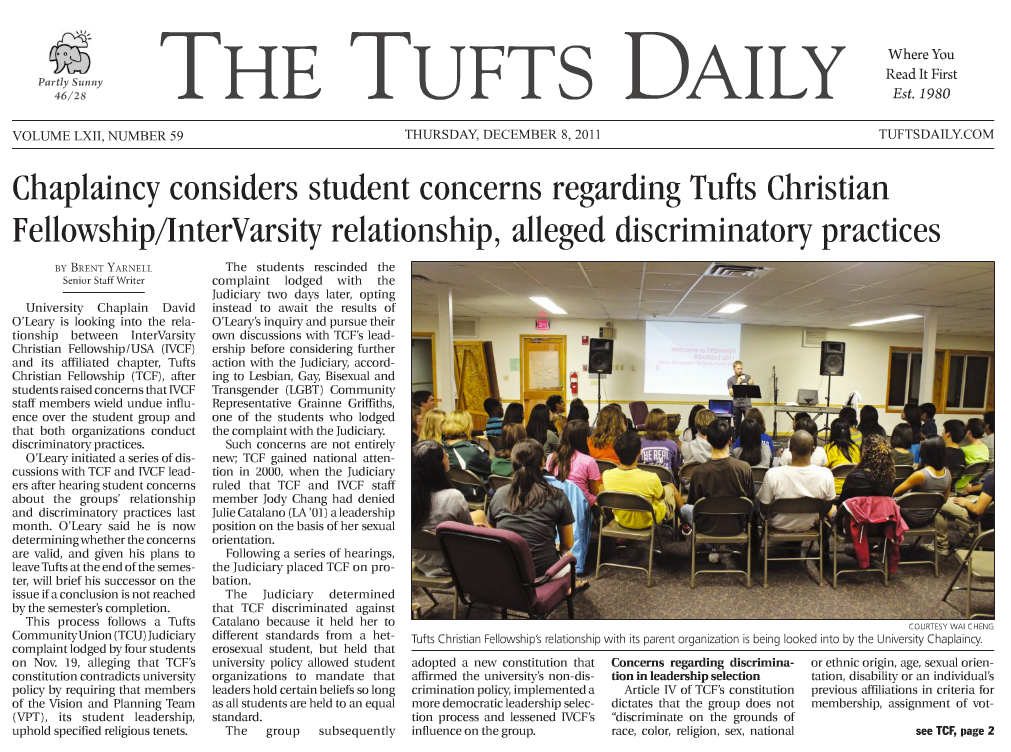 It’s not the first time this issue has come up at Tufts. Back in 2000, one of the group’s staffers denied a student a leadership position within the organization because of her sexual orientation. TCF was placed on probation after that incident.

So what’s the issue now?

The issue is that the university’s policy says you can’t discriminate against students on the basis of sexual orientation. But IVCF’s policy says that all leaders must abide by “sexual chastity,” something that LGBT Community Representative Grainne Griffiths says is “applied unequally to straight and LGBT students”:

“Chastity is interpreted differently for straight people and queer people, being that if you’re straight you can still be chaste and have a typical romantic relationship, holding hands and stuff, but if you’re LGBTQ-identified, then no contact. You have to be celibate,” Griffiths said. “That shouldn’t be happening under a non-discrimination policy which protects sexual orientation, gender identity and gender expression.”

It ought to be university policy — and that’s part of the problem. IVCF staffers — yep, they have six Christians whose full-time job it is to run this one campus group (Edit: Commenter B.H. says IVCF actually has two full-time staffers, one intern, and three volunteers) — have an “inappropriate level of influence” over the Tufts Christian Fellowship. They have no right to force their bigotry onto the group’s leadership, but they’re doing it anyway.

The university’s Chaplain, David O’Leary, is looking into the situation and he (or his successor) will soon make a decision about whether the Tufts Christian Fellowship can be recognized as an official student group.

There are really only two options: Either LGBT students will be allowed to take on leadership positions within the Christian group (staff concerns be damned) or Tufts will say goodbye to the TCF.

I vote for the latter. It’s not like any campus has a shortage of Christian groups. If one wants to break university rules, then it doesn’t deserve student-supported funding or meeting space.

December 8, 2011
The Foundation Beyond Belief Just Got a Donation from...
Next Post