As Violent Fantasies Go, This Book is a Page Turner December 9, 2011 Hemant Mehta

As Violent Fantasies Go, This Book is a Page Turner

What happens when an atheist reviews the Holy Bible on Amazon?

He gives it the lowest possible rating, writes up a hilarious (and spot on) critique, starts up a large discussion thread, and chaos ensues: 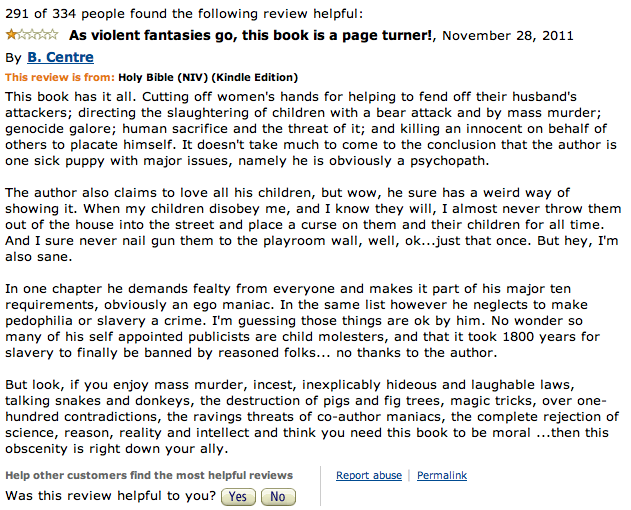 This book has it all. Cutting off women’s hands for helping to fend off their husband’s attackers; directing the slaughtering of children with a bear attack and by mass murder; genocide galore; human sacrifice and the threat of it; and killing an innocent on behalf of others to placate himself. It doesn’t take much to come to the conclusion that the author is one sick puppy with major issues, namely he is obviously a psychopath.

The author also claims to love all his children, but wow, he sure has a weird way of showing it. When my children disobey me, and I know they will, I almost never throw them out of the house into the street and place a curse on them and their children for all time. And I sure never nail gun them to the playroom wall, well, ok…just that once. But hey, I’m also sane.

I’d say that review was helpful, no? 🙂

(Thanks to Silo for the link!)

December 9, 2011 Please Don't Wish Me a Merry Christmas
Browse Our Archives
What Are Your Thoughts?leave a comment