You remember Bill Donohue, right? He’s the president of The Catholic League, an organization seemingly devoted to portraying criticism and satire of Catholic beliefs as discrimination against believers, and demanding proverbial heads on platters for perceived grievances. 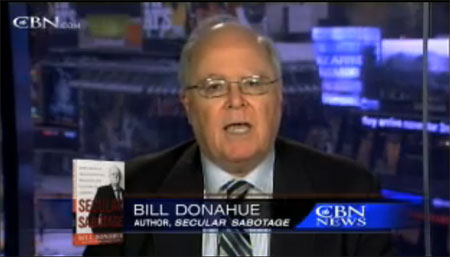 As it turns out, he might be better off playing the role of martyr, because mockery is not his strong suit. American Atheists president David Silverman told the New York Times that “We want people to realize that there may be atheists in their family, even if those atheists don’t even know they are atheists.”

This is Donohue’s rebuttal:

We think there is some merit in David’s idea, even if he has things backwards, as usual. Today we are launching our “Adopt An Atheist” campaign, the predicate of which is, “We want atheists to realize that there may be Christians in their community, even if those Christians don’t even know they are Christian.”

Here’s what our campaign entails. We are asking everyone to contact the American Atheist affiliate in his area, letting them know of your interest in “adopting” one of them. All it takes is an e-mail. Let them know of your sincere interest in working with them to uncover their inner self. They may be resistant at first, but eventually they may come to understand that they were Christian all along.

Donohue seems to labor under a serious misunderstanding. For him, the notion of a self-identified atheist not knowing that deep down, in her heart of hearts, that she is really a follower of Christ, is just as ridiculous as the notion of a self-identified Christian being an atheist in secret. The idea that a person could be unaware of their own atheism (as I once was) must seem especially ludicrous to him.

The path to atheism from a religious upbringing is, for many, a very complicated one. I intellectually rejected Christianity at age 15, but I still behaved like a Christian amongst most of my family, and members of my church. All the while, I personally struggled with what I did believe in the absence of a specific religion. I went from Christian, to agnostic, to Deist, and back to agnostic again over the course of the next seven years. Eventually, I came to a point at which I had exhausted all of my attempts to believe in God, but was unwilling to utterly dismiss the possibility.

When I finally picked up The God Delusion a year and a half ago, I was introduced to Richard Dawkins’ formulation of the belief scale, and found myself sharing his position: “I don’t know for certain but I think God is very improbable, and I live my life on the assumption that he is not there.” This is a 6 on his 1 to 7 belief scale, and it was an accurate description of the beliefs I had held for at least a year at that point. Dawkins persuaded me that my worldview was an atheistic one, without fundamentally changing it.

So I think Silverman is correct to claim that there are many with an atheistic outlook who have not fully owned up to it, privately or publicly. The media and advertising campaigns AA has become known for can certainly play a role in getting through to such people.

But what about the Catholic League’s apparently tongue-in-cheek campaign? There is a possibility that Donohue does think that many atheists are “closeted Christians” and that he’s at least partially serous. But I can’t imagine what would cause a person in our culture with sincere Christian beliefs to repress them. While there are certainly contexts in which outright expressions of religiosity might be discouraged, statements like “I’m a Christian” or, “I attend Mass every Sunday” do not carry anything like the social costs of saying, “I’m an atheist.”

Negative assumptions about atheists are persistent in our society, as Donohue himself demonstrates in his concluding paragraph.

If we hurry, these closeted Christians can celebrate Christmas like the rest of us. As an added bonus, they will no longer be looked upon as people who “believe in nothing, stand for nothing and are good for nothing.”

Silverman, in the meantime, is still spreading the message. He unveils a new Christmas-themed billboard this Monday — and it’ll appear on this site when they give us the green light.

***Update***: Catholic League communications director Jeff Field told Justin Vacula that the press release was “lighthearted, humorous and tongue-in-cheek,” adding, “If people can’t be good-humored, that’s their own problem.” Look, Jeff, we know that your boss was trying to be funny. It’s just that he’s not very good at it.

JT Eberhard noticed that, in response to the influx of responses from atheists, The Catholic League has removed the contact page from their website.

And, among the many direct appeals to the League from atheists who want to be adopted, my favorite is from Miranda Celeste Hale:

December 8, 2011 The Foundation Beyond Belief Just Got a Donation from...
Browse Our Archives
What Are Your Thoughts?leave a comment