The legalese: The Supreme Court recently declined to review a Second Circuit decision, Bronx Household of Faith v. Board of Education of the City of New York, which upheld New York City Standard Operating Procedure (SOP) § 5.9 (now SOP § 5.11), which prohibited the use of school property for religious services. 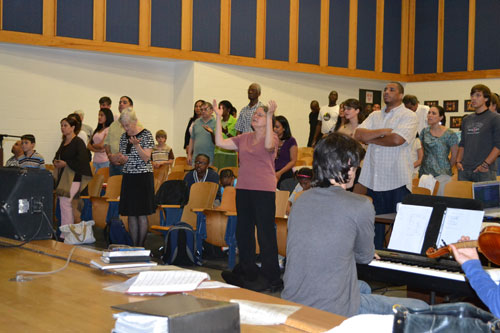 What’s really going on: In 1994, the Bronx Household of Faith (BHF) applied to use space in a public school for its Sunday morning church services.  Their application was denied because of something called SOP § 5.9.  The BHF brought suit in federal court… and their suit was dismissed.  This dismissal was later affirmed by the Second Circuit.

Then, however, the Supreme Court held in Good News Club v. Milford Central School (PDF) that it was unconstitutional for a public school district to exclude from its buildings a religious organization that planned to use the space to teach religious morals to school-aged children through the use of song, verse memorization, and lessons.  The Court held that such exclusion amounted to “viewpoint discrimination,” because the district otherwise permitted use of the space “for the teaching of morals and character,” and was excluding the plaintiffs solely on the basis of their religious affiliation.

After this decision, BHF reapplied for a permit, was again denied, and again brought suit in federal court.  This time, the district court issued a preliminary injunction against the Board forbidding them from denying the permit.  The Second Circuit affirmed that preliminary injunction.  When BHF petitioned for summary judgment (hoping for a permanent ruling in their favor, rather than a temporary injunction), the district court cited the decision in Good News Club and BHF succeeded: they were able to use school space for their services.

The Board then appealed to the Second Circuit.  (Seeing a pattern here?) The Second Circuit held that the Board was allowed to exclude BHF in spite of the Supreme Court’s decision in Good News Club. According to the Second Circuit, in cases like Good News Club, “the policy being enforced categorically excluded expressions of religious content. Here, by contrast, there is no restraint on the free expression of any point of view. Expression of all points of view is permitted. The exclusion applies only to the conduct of a certain type of activity — the conduct of worship services — and not to the free expression of religious views associated with it.”

Put differently, the Second Circuit accepted the SOP because it prohibited an activity (worship services) and not a viewpoint (Christianity, Christian morals, etc.).

To be blunt, I was shocked when I first read this case.  I’m still a little shocked because, to me, the distinction between the activity of worship and the expression of Christian viewpoints sounds incredibly thin (especially considering that the activities at issue in Good News Club included singing).  Where do you draw the line?  If your group is teaching religious morals, then you’re good to go.  But what if you’re teaching religious morals AND singing or praying?  Does the activity cross over into “worship” as soon as a more overt act, like singing, genuflecting, etc. takes place?

According to the Second Circuit, “A worship service is an act of organized religion that consecrates the place in which it is performed, making it a church.”  That doesn’t really help too much with the line-drawing, but what comes next actually makes me pretty happy: The court expresses concern that allowing such services in public schools will “promote a perception of endorsement.” This is excellent news!  The court is concerned that allowing worship services in public schools will cause people to think that the government is pro-religion, or that religion is the right way to go.  And honestly, I usually assume that this is exactly what the government thinks. (I’m not entirely wrong here, either: the United States Department of Justice filed an amicus brief supporting BHF.)  Maybe I’m being overly optimistic, but it seems that we have here a court saying: Hey!  It is important for people to understand that the government isn’t tilting the scales in favor of religion!  It’s cool with us if you’re not religious, and we don’t want you feeling like we favor those who are.

This puts me in a good mood.  Now if only we could do something about those tax breaks…

December 7, 2011
A Pastor Helps a 9-Year-Old Girl Discover the Truth About Santa... and She Brilliantly Takes It a Step Further
Next Post