Gay and Godless in Houston

We know it’s tough to be an atheist in general. It’s not easy being gay, either. But when you’re both of those things — in Houston, Texas — it’s even worse. Sometimes you feel like you’re the only person you know who fits that description.

Reader Jimmy wanted fellow Houston gaytheists to know they’re not alone and that the Houston Atheists would welcome them with open arms, so he created the following ad: 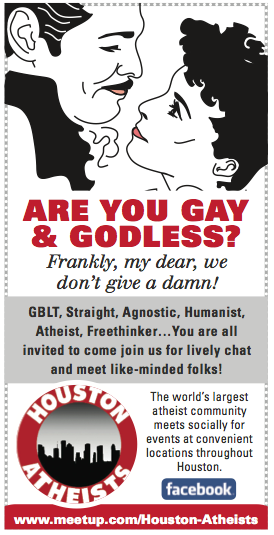 After reading the recent articles you had about the atheist billboards, I decided to come up with, and donate the funds for, an ad to appeal to the Houston GBLT community. I have been ‘out’ as a gay man but felt it was time to come ‘out’ as an atheist, in print, in hopes others in the gay community would know they have a place to go and speak freely about how they believe…

I hope that in other cities they are using the Meetup site or making arrangements through Facebook and Twitter to meet *in person* with others to talk, listen, and learn.

I share that sentiment. Even in the most conservative of areas, there are other atheists and LGBT-allies who won’t judge you for who you are or how you think.

Incidentally, Jimmy’s ad ran on p. 55 in the December edition of OutSmart, a free monthly magazine for the gay community.

Before you start criticizing the placement of the ad or the design, remember that the message is a positive one and if it reaches someone who may not know about our community, then it was effective. That’s the whole point, isn’t it?