An Atheist Visits a Catholic Conference Aimed to ‘Confront the Challenge of Secularism’ December 5, 2011 Hemant Mehta

This is a guest post by Rod Chlebek. Rod is the web director for Michiana Skeptics based in South Bend, IN and a cost analyst by day. 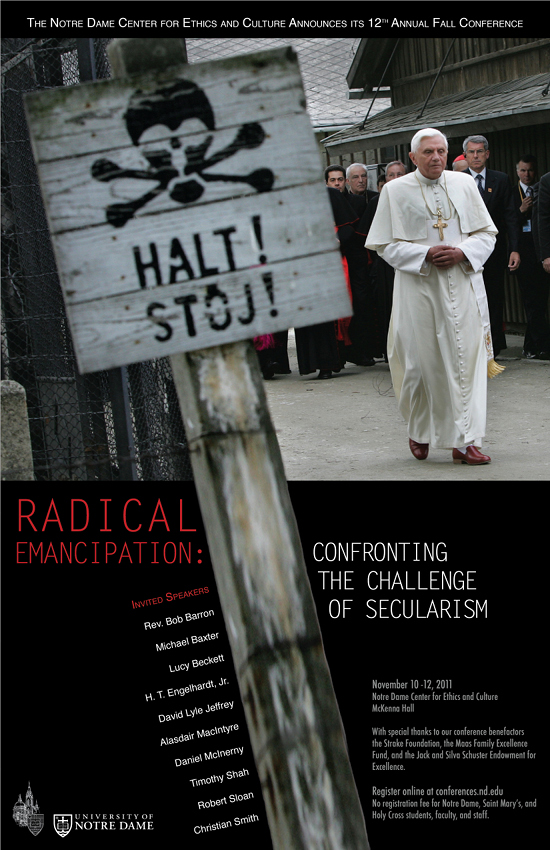 Once a year, the Notre Dame Center for Ethics and Culture hosts its annual fall conference, this year entitled “Radical Emancipation: Confronting the Challenge of Secularism.” There was certainly a lot to choose from here; many lectures ran simultaneously. One in particular that caught my eye talked about “New Atheism.” Sounded perfect. I wanted to hear how they described non-believers like me.

Shortly after finding a seat in a small meeting room with a little over a dozen others, the chair introduced the speakers. First up was Professor Patrick Flynn from Benedictine University with his paper, “Faith, Culture, Skepticism and ‘New Atheism’.” His opening remarks noted an American Atheists billboard with a nativity scene and this “irreverent, sarcastic message”: “You KNOW it’s a myth. This season, celebrate REASON!”

Then Flynn mentioned Richard Dawkins, Sam Harris, Daniel Dennett, Victor Stenger and Christopher Hitchens along with their works as he described the “New Atheism” movement.

There’s certainly nothing new about non-belief. Atheism has been around for a long, long time. However, there is something new about how we’re handling it. We’re finally making noise. I know that many of us appreciate the recent scrutiny of religion, but not everyone agrees on the delivery. (Just think about the reactions to the various billboard campaigns.) Flynn wanted the audience to believe, though, that each organization or author unified and represented all of our opinions. He couldn’t be further from the truth.

I’m always careful to ask “What do you believe?” when speaking with a Catholic. I don’t automatically assume the details or degree of their belief, or whether they attach themselves to any one particular apologist. I feel we should be getting the same consideration in return.

Later, Flynn went into a rather long explanation of premises and conclusions about New Atheists’ criteria for believing things and when we called things rational or irrational. In the end, here’s how he summed it up:

I disagree. If we ask someone how the weather is, there is “genuine scientific evidence” on which to base a belief. We’ve probably asked people how the weather is at least a few hundred times by now. Their responses are called arguments. They becomes testable when we look or go outside. Then we’re able to tell if their arguments are both valid and reliable. At this point it becomes evidence. This is the scientific method. Whether we realize it or not we’ve been doing this since we were babies, observing the world around us and making the sort of mental notes that lead to belief. “Doing science” isn’t limited to lab coats and archaeological digs — which is what Flynn is accusing New Atheists of when he hands us an ill-fitting definition.

Next up was Professor Margaret Monahan Hogan from the University of Portland. Hogan introduced “God Conscious Humanism” which she believed was the portal to radical emancipation. Surprisingly, I really enjoyed Hogan’s lecture. She raised the consciousness of the dangers of fundamentalism of both sides of the spectrum and brought to light the spiritual nature of human beings. When I say “spiritual,” I mean it metaphorically of course. She warned us that radical secularism would strip God entirely from our lives (as if that were a bad thing) and held the Catholic Church accountable for maintaining “God Consciousness.”

Of course, the idea of the Catholic Church being in charge of anything scares me, but aside from that, I think Hogan touched on a significant part of being human. We all have the same basic set of philosophical questions about life and we all share the same set of emotions or feelings. After listening to her arguments, I think the assumption was that we atheists would live a very dry and stale life in a society without a god. She’s wrong, though. Our “spirit” is a product of nature, not of a god, and we’d be fine in a world free of religion.

Last up was Ryan Topping of St. Thomas University. He stated that young men now play video games for 2.5 hours a day and that’s a far cry from forty years ago when our parents and grandparents would have gone to an evening gathering at a fraternity. We’re finding our nourishment elsewhere, “in yoga classes or perhaps a soft bowl of tofu.” He offered a four point plan to renew the Church: “End abortion. Have more kids. Teach them Latin. Build better churches.”

Interestingly, enough, I was raised Catholic (altar boy and all) and I took three years of Latin. I became a skeptic. So much for Topping’s plan.

Afterwards, there were some questions centering around the attachment that New Atheists seem to have with Darwinism and Dawkins. Allegedly, Darwin and Dawkins mean a lot to us because they help us justify our atheism, something that we didn’t have decades ago. And now that more information is available in the realm of science, we use that to justify our atheism by idolizing it more and understanding it less (which Flynn suggested).

If there’s one thing I learned, it’s that panels and lectures like this aren’t enough if Catholics really want to achieve an understanding of what atheists believe. It would’ve been interesting to have a New Atheist up on that panel, countering their statements. At least it would’ve made for a more interesting discussion.

December 5, 2011 News Station Won't Say the Word 'Atheist' to Describe Atheist Group
Browse Our Archives
What Are Your Thoughts?leave a comment