If They Can Quote Bible Verses, So Can We December 4, 2011 Hemant Mehta

If They Can Quote Bible Verses, So Can We

At Salisbury University on Maryland’s eastern shore, a campus Christian group chalked the ground (as groups do) with the following Biblical message: 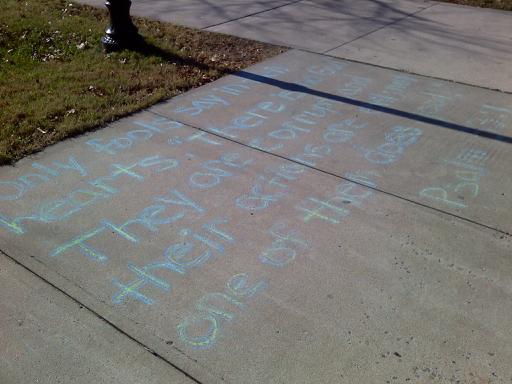 Only fools say in their hearts, “There is no God.” They are corrupt, and their actions are evil; not one of them does good!

So what are atheists at the school supposed to do? Respond with Bible verses of their own, of course 🙂

Reader John explains what he and a few friends did:

We began with Deut. 22:22 and graduated to Exodus 22:20. Then we wrote “Rape victims must marry their rapists” and correctly attributed it to Deut. 22: 28-29, and “God Supports Slavery” and the corresponding verses.

Within about 30 minutes, the campus police were called and took our IDs. Then the dean of students invited us into his office where we had a very productive conversation and he ended up supporting our free speech and our motives, and assuring us that if any of the chalk was washed away, all of it would be (not just ours).

When we came outside, someone had given an order to wash away our chalk, so the dean of students was forced to have the whole campus washed — his office apologized.

Sounds like a potentially bad situation that turned out alright. Everybody learned their lesson, right? The Bible is full of a lot of really shitty passages and context matters.

That’s not how local news station WBOC-16 spun the story:

Seeing chalk on the sidewalks at Salisbury University is a regular occurrence. Some groups and clubs use it as a way to promote events and get their messages out there. But early Friday some students say things went a little too far.

Statements such as “God supports slavery,” and “Rape victims must marry their rapist” [were] written on the sidewalk near Guererri Hall. Surveillance videotape helped Campus Police apprehend several Salisbury students.

No immediate disciplinary action was taken against the students but the school’s Dean of Students met with the students involved, and encouraged a more positive kind of discourse and use of the freedom of speech.

There’s no context to the story and no mention of what the Christians wrote to start the controversy. Just an implication that the atheists would get into trouble. Not true.

The reaction is just another example of a double-standard between Christians and atheists. When they quote the Bible, they’re righteous. When we do it, we’re dicks. It doesn’t matter what you quote.

I don’t think the Christians who started this should get in trouble either. They get their free speech, too. But atheists have every right to publicly mock the hell out of it.

December 4, 2011 Freethought Society Holds Tree of Knowledge Rally in Front of Pennsylvania Courthouse
Browse Our Archives
What Are Your Thoughts?leave a comment