Mindy Kaling is best known as a writer, producer, and co-star of The Office. She plays Kelly Kapoor, the bubbly and vacuous customer service rep, and has written some of my favorite episodes of the show (“The Dundies,” “The Injury, “Ben Franklin”). She also gave a clutch supporting performance in the otherwise mediocre No Strings Attached.

I expected her new book, Is Everyone Hanging Out Without Me? (And Other Concerns) to be light and funny, and I was not disappointed. The memoir portions tell of her experiences as the suburban child of immigrant professionals and the early struggles involved in breaking into the fields of television and comedy. She also provides a lot of insightful, good-natured mocking of the conventions of pop culture and the entertainment industry.

Her chapter on romantic comedies, which was excerpted in The New Yorker, is a representative sample.

I do, however, have two complaints with the book. One is general, and the other specific. The former regards her writing style: it is too conversational. At times, it seems like she is tossing off a witty e-mail rather than writing a book. My second gripe is with her defense of the TV psychic she used to work for.

After failing to land a position as a CBS page, she had to settle for her first job in television: as a production assistant on a show she nicknames Bridging the Underworld with Mac Teegarden. “Teegarden” was “wildly normal,” and “attractive in a Mario Lopez way, with… a wardrobe of tight, long-sleeve t-shirts.”

It is obvious that she’s talking about “psychic medium” John Edward, as this 2007 AV Club interview confirms. 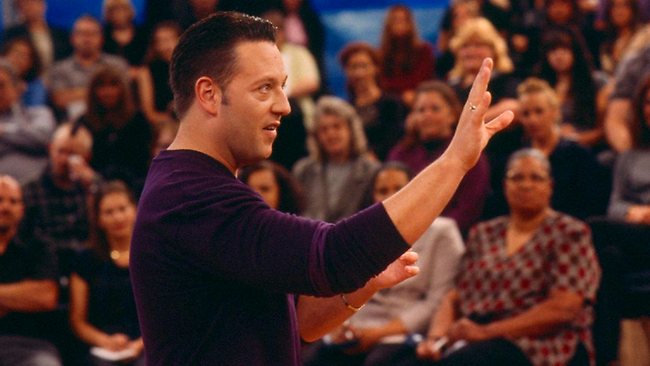 In addition to being a foot in the door in the entertainment industry, it was her first job with health benefits. Her primary duty was to assist the producers in building segments around members of the studio audience whose loved ones Edward claimed to communicate with. She was also the point of contact for many guests in the weeks following their appearance on the show, and sometimes spent hours talking with them about their deceased relatives and friends. She writes that the concentrated listening involved with the task was useful experience when she became a producer for The Office.

Reflecting on her time with the show, she decides that the program did more good than harm.

If I had to testify under oath, I would admit, no, I don’t believe Mac Teegarden is psychic. I’ve just been made too aware of people like Carl Sagan and basic science and stuff. I am certain, though, that Mac Teegarden provided an enormous amount of comfort to people who had unexpectedly lost loved ones. I don’t know if it was psychic, but it was cathartic, and therapeutic, and it helped people.

Kaling was the one who talked to these people, so she knows better than I do how Edward’s “help” affected them. The broader picture, however, is not so kind to the man.

First of all, “psychics” who do not have TV shows still need to make a living, and they charge money: sometimes quite a bit. That the time and money people spend trying to forge a supernatural connection with someone they have lost would be better spent in seeking professional, scientific help should be uncontroversial. In some cases, seeking out help from self-declared mediums can become habit-forming, taking on qualities often associated with addiction. Putting John Edward and his ilk on TV promotes and legitimizes this dishonest industry.

And what about the all the people who make it into the studio audience but are unable to get a reading from Edward? That has to be a crushing blow for a grieving person. And Kaling herself brings up another unsettling point in the AV Club interview:

People really did seem to believe. We’d get these letters too, people were like, “I’ve been waiting a year and a half just to come on the show,” and it’s just this shitty little studio off in Astoria. We were just like, “Wow.”

Imagine someone waiting a year and a half with the false hope of getting some scrap of information from a person they have loved and lost. The idea is both heartbreaking and outrageous. I cannot fathom a way that such a thing could be good for their mental health. It is unfortunate that Kaling, having taken on the task of writing about her experiences on the show, does not seem to have considered the implications of its practices and of Edward’s profession.

I should re-iterate that most of the book is very funny, and I’ll leave you all with the unique argument Kaling (who identifies herself as a “cultural Hindu”) makes for having a secular funeral:

Please, no religious stuff. I kind of insist no one mention God or anything at my funeral. I’m not making some big atheistic statement, but I want this to be solemn because people are so upset I’m dead, and I don’t want to share the spotlight with God.

December 1, 2011
Thanks to Christians, Atheist Holiday Displays Will Flourish in Loudoun County
Next Post