Ohio License Plates May Include God in the Background November 30, 2011 Hemant Mehta

Ohio License Plates May Include God in the Background

Remember when the Ohio Secretary of State Jon Husted held an online poll to decide which “I voted” sticker would be given out to voters this November? Two of the stickers mentioned God, but your votes helped another sticker rise to the top!

Now, Governor John Kasich is using an online poll to help decide the slogans that will appear in the background on the state’s new license plates and drivers licenses.

And, wouldn’t you know it, one of the slogans happens to be “With God All Things Are Possible”… 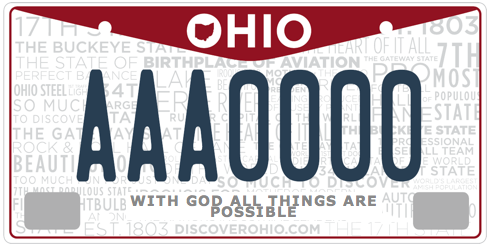 The names of famous Ohioans, sports teams, historic sites, slogans, and other snippets of information are all game. The design, the product of the Columbus College of Art & Design, features a red aviation-wing triangle on the top with the outline of the state and “Ohio” in capitals.

The background behind the large black license plate numbers and letters will include numerous snippets of Ohio-specific phrases and mottos in faded print that citizens can select via http://myplate.ohio.gov. They may pick from a number of suggestions made on the Web site or propose their own. A committee will make the final selections from the suggestions.

Despite the placement of the slogan in the image above, it looks like (if chosen) the slogans would appear in the background — right where all those placeholder words currently rest.

It’s going to be tough for the Godly slogan (which is also the state motto) to be knocked out of any top slot since several of them will be considered by the committee, but one way to help push it aside it to vote for several of the other options. You can vote 10 times in any 24-hour period, so get to it! We have about 40 days (ha!) to make this happen.