An Atheist’s Generosity Comes Through Thanks to Reddit November 30, 2011 Hemant Mehta

Back in July, I promoted a contest at GiveBack.org that promised $50,000 to the person who received the most votes. An atheist named Chris McCoy asked other users on Reddit to vote for him and he quickly took over the top spot, eventually winning the money:

I was partly excited because it showed how powerful atheists could be when we worked toward specific goals and partly (ok, more than partly) excited because Chris said he wanted to support several secular causes, included Foundation Beyond Belief (on which I serve as chair of the board of directors).

For a while after Chris won, it seemed like nothing was happening. I wasn’t hearing about the money and I didn’t know where it was going. I just knew the secular groups weren’t seeing it.

Well, I can finally give you all an update. I had a chance to talk to Chris recently about his plans — and what he’s doing with his winnings is just a wonderful story.

“Erin B.” had been campaigning [on GiveBack.org] on behalf of her son, Thor, who has autism spectrum disorder and needs a service dog. To acquire a service dog, each family is responsible for raising a portion of the $22,000 cost. Appreciating Thor’s needs and that Erin had also held the lead in the contest, Chris’ first donation will go to 4 Paws for Ability.

2) Next, Chris made a $20,000 donation to Doctors Without Borders during the recent Reddit Atheism fundraising drive (which has now raised over $200,000).

That huge gift barely registered with the folks at Reddit, inspiring one user to create this image: 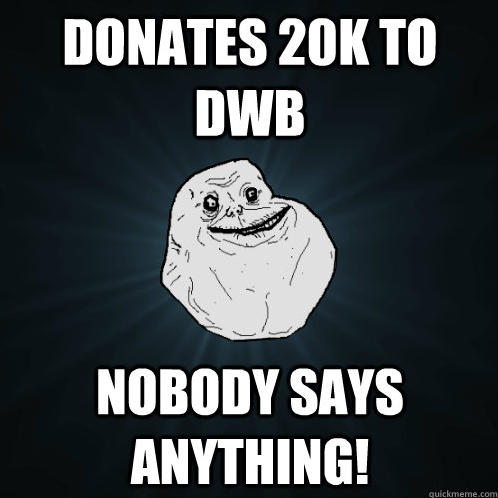 3) Chris plans to save another $20,000 for use in the coming year. He’s not sure where it’s going just yet, but he knows he wants to “increase the number of people using GiveBack.org,” because 100% of the donations made through the site go directly to charity. He added that he just didn’t “want the money to go to waste or go unnoticed.” Now, he’ll have plenty of time to get vital feedback about different organizations and make good decisions with the money.

4) That leaves $5,000. And Chris made a suggestion that sounded great: He wants to match contributions given to the Foundation Beyond Belief by the folks at Reddit Atheism up to that amount.

Specifically, you’d be giving equally to the five charities we’ll be sponsoring during the First Quarter of 2012. Now, the challenge is to get to that $5,000 amount and surpass it — all within the next two weeks. More information is here at Reddit.

So would you consider making a contribution?

Keep in mind, by the way, that all these contributions go entirely to the charities. We don’t take out overhead, so the Foundation isn’t seeing any of it. But we could use your support there, too, and if you want to support what we’re doing so we can keep doing it, we’d appreciate your generosity 🙂

Thank you, Chris, for showing how generous and thoughtful non-religious people can be, especially when handed such a fantastic opportunity.