Over the weekend, reader Larry Mathys‘s brother and sister-in-law found something disturbing in their son’s bed: 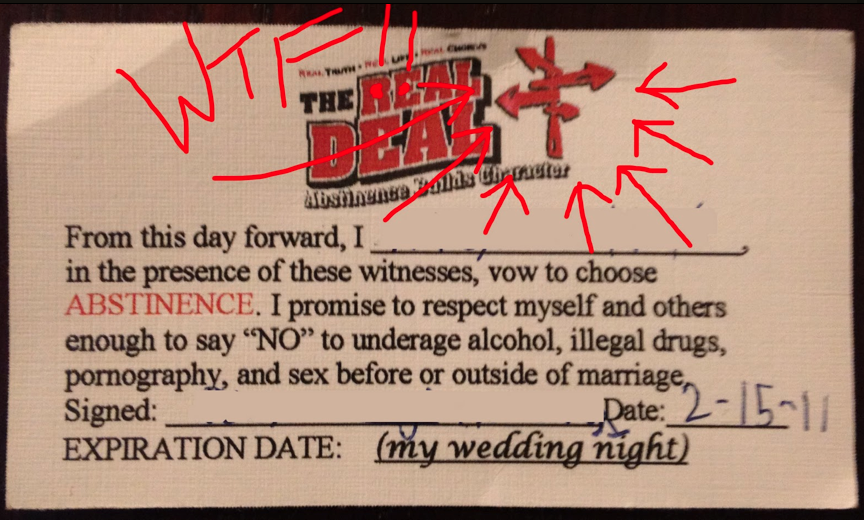 Without asking for parental consent, a group of Christians from the group came to the nephew’s school to promote abstinence.

The issue isn’t that it’s a Christian group. They didn’t mention faith in their presentation at all, according to the nephew.

The issue is that they’re spreading bad information. Larry explains:

Even if these deluded people believe that a significant number of teens, in the heat of a mutually consenting moment of heavy petting will suddenly put an end to it because they remember that they signed a 3″ x 6″ contract with the good people at, “The Real Deal”, there’s still the matter of valid data. I mean, if we’re going to address a real problem, then we have to be honest with ourselves and provide real data. And from everything I could find, teen pregnancy has been on the rise in Arkansas over the past 6 years.

The Heritage Foundation, a conservative think tank, promoted The Real Deal this way back in 2002:

Abstinence by Choice operates in 20 schools in the Little Rock area of Arkansas. The program targets 7th, 8th, and 9th grade students and reaches about 4,000 youths each year. A recent evaluation, involving a sample of nearly 1,000 students, shows that the program has been highly effective in changing the attitudes that are directly linked to early sexual activity. Moreover, the program reduced the sexual activity rates of girls by approximately 40 percent (from 10.2 percent to 5.9 percent) and the rate for boys by approximately 30 percent (from 22.8 percent to 15.8 percent) when compared with similar students who had not been exposed to the program. (The sexual activity rate of students in the program was compared with the rate of sexual activity among control students in the same grade in the same schools prior to the commencement of the program.)

However, a paper by Dr. Douglas Kirby (PDF) (also from 2002, sponsored by the National Campaign to Prevent Teen Pregnancy) looked at several “Effective Abstinence-Only Programs” as listed by the Heritage Foundation and found that Abstinence By Choice wasn’t as great as it was made out to be:

Abstinence by Choice. This study did not meet the minimal criteria for Emerging Answers because it had a very weak research design (Weed, 2001). In particular, it did not have pre-intervention and post-intervention data from a comparison group of the same age.

It shouldn’t be this hard to get honest, accurate information about sex and drugs to younger students. According to The Real Deal’s own workshop notes, they teach kids to be abstinent by showing them slides of STDs, asking kids “what [it would] be like around school if others knew you had an STD,” and asking them how premarital sex will impede their life goals. It’s as if any form of premarital physical contact with someone you like is automatically evil.

There should be a place in school curriculums for serious discussions about these topics. But let’s have a honest discussion, not one based on faulty assumptions. One of the goals of sex education ought to be to make sure kids are aware of and mature enough to handle the consequences of sex (physically and emotionally) before they decide to have it, not to scare them away from it for good until some ill-defined “expiration date.”

If there’s a group like this coming to your children’s school, talk to the administration about getting it cancelled. They don’t have the facts, but they have no problem spreading lies and pretending like they know what they’re talking about.

November 30, 2011 A Christian Who Doesn't Care About the Phrase 'Happy Holidays'
"Mandates requiring safety glasses are reasonable, even though a person chooses not to, they do ..."
BertB Judge Tosses Lawsuit from Religious Workers ..."
"https://uploads.disquscdn.c..."
RAM Preacher: If the Government Executed Gays, ..."
"Is there a certain amount of consent on your part involved when you were coerced/blackmailed ..."
Zasz Shermer: Progressives Should Celebrate How Thomas ..."
"We've always composted everything that we can. When we were right out of college, my ..."
Brandon Myles Preacher: If the Government Executed Gays, ..."
Browse Our Archives
What Are Your Thoughts?leave a comment