You would think a “Tree of Knowledge” would be the least controversial holiday display of them all: 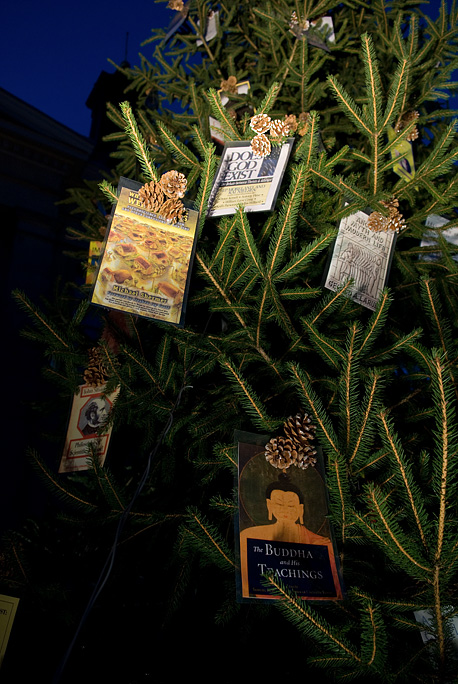 In previous years, book covers included The Myth of Nazareth by Rene Salam, Why I Am Not a Muslim by Ibn Warraq, and Misquoting Jesus by Bart Ehrman. There were also covers of the Bible and Koran. It’s a good mix of holy books and books that criticize them. That’s what knowledge is, after all — learning enough so you have a set of beliefs, and then being open to having those beliefs challenged. It’s hardly an attack on any one particular belief.

“We want people to read these kinds of books so they can make up their minds about religion, not just be spoon-fed by pastors and priests and rabbis,” [Margaret] Downey explained.

But after three successful years of that tree going up in front of the Historic Chester County Courthouse in West Chester, Pennsylvania — alongside creches and menorahs — the county commissioners have found a way to block the Freethought Society from putting up their tree. Last year and this year, they’ve just put up a secular display of their own:

The county display last year included Santa in a sleigh, a toy train, banners proclaiming “Peace on Earth” and “Seasons Greetings,” and a wreath honoring military service members, as well as a traditional creche and a menorah.

“They finally figured out a way of keeping us out,” Downey said.

During an interview in October, commissioners’ Chairman Terence Farrell said county officials have seen a lot of controversy about this issue and suggested that they commissioners stick with the displays they used last year unless a compelling reason arose to deviate from them.

Even if they’re allowing a secular display alongside the religious ones, Downey isn’t happy with the decision — she shouldn’t be — and she’s planning a rally on December 3rd:

Next Saturday, the supporters plan a similar format to last year’s gathering, with speeches, singing, photo opportunities and a news conference. Downey said the songs sung at the rally are popular in the non-theist community and include “You Gotta Fight the Battle Between Church and State,” sung to the religious tune of “Joshua Fought the Battle of Jericho.”

“We want people to see that it’s a symbol accepted by the non-theist community and it’s used and recognized everywhere,” Downey said.

Supporters are encouraged to gather at the corner of High and Market streets about 3 p.m. Saturday. The group then plans to get together for dinner about 5:30 p.m. at Kildare’s Irish Pub.

Last year, in spite of their ban, the supporters got together to create a Human Tree of Knowledge: 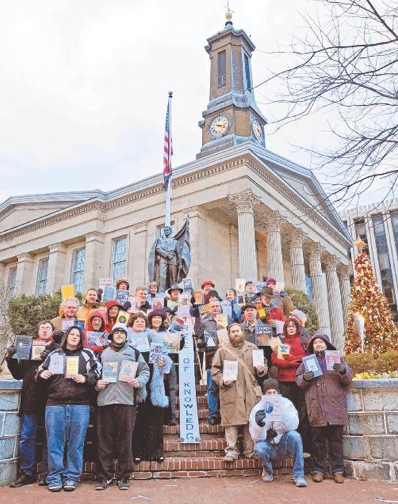 This year, I’d love to see an even bigger rally. (If you’d like to volunteer and help out, details are here.)

If you’re a religious person who supports separation of church and state, please join them. Downey and the other atheists aren’t just standing up for themselves — they’re fighting on behalf of every minority group not allowed access to the front lawn of the courthouse. They’re fighting on behalf of the principle that a couple of religious groups don’t represent everybody.

Downey believes that majority religious groups should not have a monopoly on the holidays. She notes that religious persons, specifically Christians, argue that the holiday is ‘their holiday’ and want to exclude others from being represented in free speech zones on public property. Downey says, “a free speech zone isn’t just for eleven months a year. Christians shouldn’t be the only ones recognized. We should have equal access every day of the year.”

November 27, 2011
Foundation Beyond Belief Looking for Spring Interns
Next Post

November 28, 2011 Christian Group Demands That We All Say 'Merry Christmas'
Browse Our Archives
What Are Your Thoughts?leave a comment