The New York Times‘ Emily Brennan writes about a subject we can’t talk about enough in our community: the plight of African-American atheists (under the headline “The Unbelievers”). The story will appear in tomorrow’s print edition: 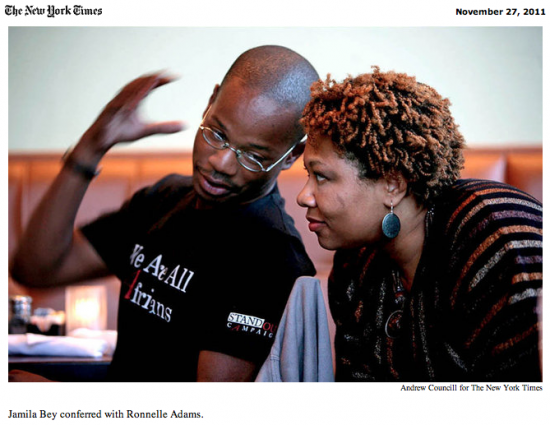 … [Ronnelle] Adams did not meet another black atheist in Washington until 2009, when he found the Facebook group called Black Atheists, which immediately struck a chord. “I felt like, ‘100 black atheists? Wow!’ ” he said.

In the two years since, Black Atheists has grown to 879 members from that initial 100, YouTube confessionals have attracted thousands, blogs like “Godless and Black” have gained followings, and hundreds more have joined Facebook groups like Black Atheist Alliance (524 members) to share their struggles with “coming out” about their atheism.

Though it’s fantastic to see this particular movement getting coverage, the article doesn’t really break any new ground. It restates what most of us already know:

The article doesn’t mention the way some black artists have used their musical talents to express atheism, the growing call from within for more diversity in our movement, or how the Harlem Renaissance was led by many black atheists.

Still, we don’t talk about this subject nearly enough and it’s great to see a prominent newspaper featuring the story.

And, damn, are the soundbytes compelling:

The pressure [blogger Wrath James White] feels to quiet his atheism is at the heart of a provocative statement he makes on his blog: “In most African-American communities, it is more acceptable to be a criminal who goes to church on Sunday, while selling drugs to kids all week, than to be an atheist who … contributes to society and supports his family.”

Over the phone, Mr. White said he does feel respected for his education and success, but because he cannot talk freely about his atheism, it ultimately excludes him. When he lived in Los Angeles, he watched gang members in their colors enter the church where they were welcomed to shout “Amen” (they had sinned but had been redeemed) along with everyone else.

“They were free to tell their story,” Mr. White said, while his story about leaving religion he keeps to himself — and the Internet.

As with so many of us, the Internet is one of the only safe havens for black atheists to talk about how they really feel. But the Internet havens will allow physical communities to form and grow, too, and that in-person connection may provide the impetus so many people need to come out to their friends and family.

November 26, 2011 What's Happening with CFI Canada?
"While I am in total 100% behind this; the bible bullies will still find a ..."
Joan Pasley Under GOP Pressure, U.S. Military Gives ..."
"This. Conservatives are controlled by their fear. And yet, clowns like Three Name Troll love ..."
InDogITrust Christian Pastor Gets Kicked Out of ..."
"Thank you, InDogITrust. Yes, my family has been solid."
Synfandel There Will Be a Virtual Memorial ..."
"Never been in the military, myself, but I am very glad that Mikey Weinstein has ..."
Troublesh00ter Under GOP Pressure, U.S. Military Gives ..."
Browse Our Archives
What Are Your Thoughts?leave a comment