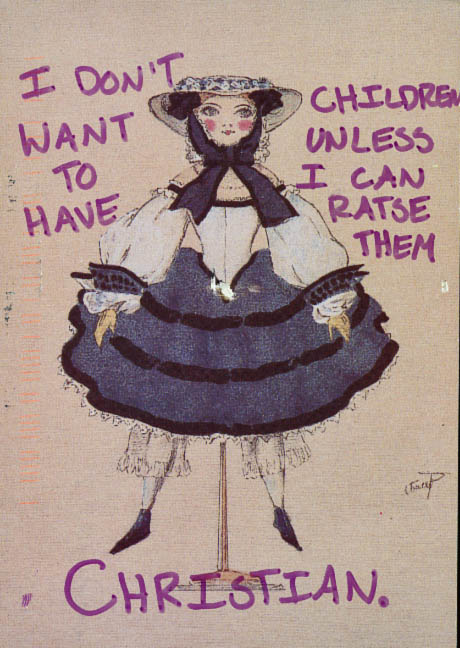 Here’s a thought: Why not just raise your children with proper ethics and morals? Why not teach them right from wrong? Why are the superstitions and Christian mythology so damn important to you?

Because if you teach the kids how to think, you don’t have to teach them what to think. It doesn’t matter if you’re a Christian parent or a Muslim parent or an atheist parent.

There are wonderful children who grow up in non-Christian and non-religious families just as there are plenty of children who don’t turn out so well despite being raised in a Christian household. The reverse holds true in both cases, too.

Just because you raise the child to be Christian doesn’t mean the child will turn out to be good, intelligent, perfect, etc — nor does it mean the child will stick with the faith as s/he grows up. There’s more to raising children than slapping some religious label onto them, especially when it won’t mean much for at least another decade.

Here’s another thought: Just don’t have children. You’ll be fine without them. So will we.

November 26, 2011
This is Why Atheists Are Angry
Next Post

November 27, 2011 Atheist Billboards in Columbia, South Carolina Get More Press
Browse Our Archives
What Are Your Thoughts?leave a comment