Brendan Smith is best known for his work on The Brick Testament — Bible stories told through carefully placed Lego pieces. Like the story of Lot getting raped by his two daughters. 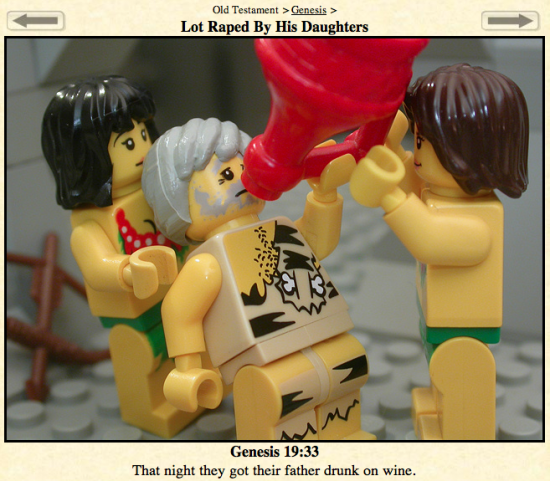 The site is so popular that Smith just released his fourth book, The Brick Bible: 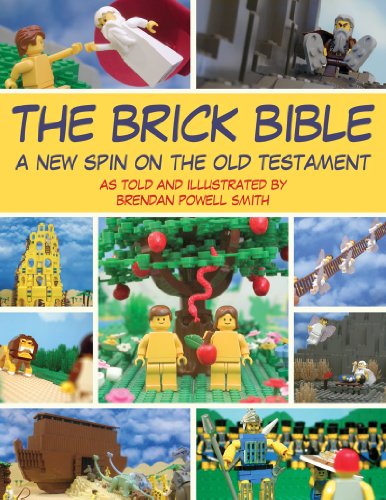 Despite all the success, one major retailer is banning the book from its shelves because it’s not happy with the content. Smith explained on the book’s Facebook page:

I have just been informed that Sam’s Club is pulling The Brick Bible from the shelves of all of their retail locations nationwide due to the complaints of a handful of people that it is vulgar and violent. This despite the book containing only straightforward illustrations of Bible stories using direct quotes from scripture.

The Brick Testament has won tens of thousands of fans across a wide spectrum of beliefs who appreciate it as a fun, engaging way to get a better knowledge of the Bible’s contents. I know that The Brick Bible book will not be right for everyone, but it saddens me to think that a ban at Sam’s Club will prevent thousands of people from coming across The Brick Bible and being allowed to make up their own minds about it.

All this happened after Smith agreed to eliminate certain scenes from the book:

[Smith] also addressed the fact that “it was reps from Walmart/Sam’s Club who had seen an advance version of the book and said they were very interested to place a large order of the book for their stores, but only if we were willing to remove or replace a dozen of the Old Testament illustrations — out of 1,400 total — that showed Lego people in sexual poses. So there are no illustrations of the Bible’s sex content in the book.”

Sam’s Club denies having that conversation with him.

They added that they were just responding to complaints from customers who said the book contained mature content and was *clearly* aimed at children.

Think about that for a second. Some parents were trying to buy a version of the Bible for their kids, but when they opened up The Brick Testament, they were shocked at how graphic and disturbing the scenes were. They don’t see the irony that it’s really the Bible that’s to blame for their reaction, not the Lego pieces. Hell, it’s not like the Lego characters were reenacting something that was never in the Holy Book in the first place…

So Sam’s Club doesn’t like the vulgarity and violence in The Brick Testament, but does anyone doubt they’re going to keep the actual Bible on their shelves?

How’s that for hypocrisy.