Why the Camp Pendleton Cross Needs to Come Down November 23, 2011 Hemant Mehta

Why the Camp Pendleton Cross Needs to Come Down

A group of “Iraq War veterans and two Marine widows” recently erected a 13-foot cross to honor friends who lost their lives in battle. If that’s all it was, I wouldn’t have a problem with it. I might think the cross was excessive — my god’s dick is bigger than yours — but I wouldn’t try to stop them.

The problem is that they put it up at Camp Pendleton, a military base that’s public space. It’s as illegal as putting a Nativity Scene in front of City Hall… but this one packs much more of an emotional punch: Criticize the cross and you’re really criticizing fallen soldiers. 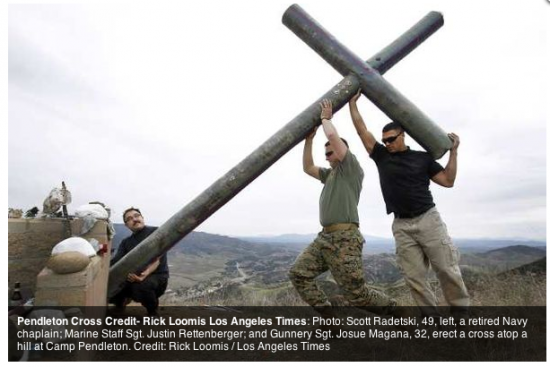 Jason Torpy, the president of the Military Association of Atheists and Freethinkers (MAAF) and a war veteran himself, is trying to raise a challenge to this, but he’s having a tough time finding support. It’s too bad because he makes a lot of sense:

“It’s an important message that we certainly respect veterans because we are veterans and we have active duty personnel,” Torpy said. “They can have a war memorial — that is fine. But if it is a Christian memorial, it needs to be on private land. That is the long and the short of it.”

According to Camp Pendleton, legal authorities are currently investigating the situation, and upon completion of the review, will send their findings up the chain of command.

Jason’s not asking a lot. Just move the cross to a private area and he won’t protest. As it stands, what’s going on ought to be considered government promotion of Christianity — and that has no business in our country, no matter where it’s happening and no matter what it represents.

This isn’t the first time a violation has occurred, either. A cross first went up on that space in 2003 (by individuals acting without authorization). It was accidentally burned down in a base-wide fire in 2007. In 2008, a new cross took its place (more on that in a moment), again without official authorization, though a unit commander seemed to be in charge. Finally, that cross was replaced last month with this current fire-resistant one.

You should check out the video from when the 2008 cross went up. There’s actually official Pendleton video of an entire unit marching up to the cross — as well as video of a Sergeant Major giving a Christian prayer:

If all that isn’t government endorsement of religion, then what is?

It’s unbelievable how Jay Sekulow of the American Center for Law and Justice is responding to this. He says the cross should stay up because it’s really just “used as a widespread and universal symbol of remembrance.”

In other words, crosses aren’t really Christian, so stop complaining.

Yeah… and in other news, the Pope ain’t Catholic.

(***Edit***: For what it’s worth, the Supreme Court has previously ruled, wrongly, that the cross is not Christian.)

The lawsuit is still up in the air right now. Military officials haven’t made a final decision about it.

Activist and lawyer Randall Hamud makes a strong argument for why the cross needs to come down:

Had this scenario unfolded on private land, nobody could question its propriety. However, their project was carried out on public property — Camp Pendleton is a military base owned by the federal government. When they erected their cross on that hilltop, they violated the Establishment Clause of the U.S. Constitution — the very Constitution for which those four fallen Marines — and all of our fallen military personnel in all of our wars – sacrificed their lives.

During the last 20 years, our armed forces have fought three wars. U.S. service members killed or wounded in those theaters of conflict have included not only Christians, but also Jews, Muslims and those of many other denominations, as well as atheists and agnostics. Yet a Christian cross now adorns a hilltop inside Camp Pendleton. That is plainly wrong. By definition, the cross symbolizes and favors Christianity, to the chagrin of Jewish, Muslim and other non-Christian service members who take the same oath as their Christian counterparts to defend the Constitution and who, on occasion, are also called upon to make the ultimate sacrifice.

Let’s hope the judges see it that way, too.

Jason makes a final plea to Christians who see him as the enemy for trying to take down the cross:

Those individuals who took it upon themselves to post this cross have imposed their beliefs on others. Those who ignored this violation, or worse, forced their units into mandatory prayer at this cross, should bear responsibility for the hurt feelings and offense that Christian Marines now feel as this cross is challenged. This would not have happened had a Flag, plaque, or non-sectarian statue been placed. This would not have happened had those Marines chosen to place their memorial on private land rather than federal land. MAAF hopes that those Marines who placed this cross can prevent this bad will by stepping forward to propose a non-sectarian memorial to honor all Marines.

Let’s throw some support Jason’s way. He’s doing the right thing and getting a lot of flak for it. Speak up. Write about this. If you’d like to make a donation to MAAF, that’d be helpful, too. Better yet, if you’re a part of our military, please consider becoming a member.

You can also send an email to the Camp Pendleton Inspector General letting the office know you don’t approve of the Pendleton Cross.

November 23, 2011
Superstitious Christian Worker Sues Because Workplace Made Him Wear a '666' Sticker
Next Post

November 23, 2011 An Update on GelatoGate
"So you're saying he's a White Court Vampire?"
The Mighty Damuramu (pka TOW) “Psychic Medium” Thomas John Fell for ..."
"However, in a civil case, spoliation of evidence can be sanctioned by treating it as ..."
se habla espol In Deleted Sermon, Georgia Shooter’s Pastor Said ..."
"I'll take three!"
The Mighty Damuramu (pka TOW) This Preacher Claims to Have Proof ..."
"Pastor Greg Locke is a disgrace to humanity. If he gets the Delta Variant and ..."
Tacoma Atheist Christian Hate-Preacher: If You Come to ..."
Browse Our Archives
What Are Your Thoughts?leave a comment