Atheists in Idaho Get Press

***Update***: I forgot to link to this video featuring Lew Payne, organizer of the Boise Atheist, Non-Theist, and Humanist meet-up group.

You’ll never see an article where the subject is “Christians have a place to meet!”

But when we’re talking about atheists — in Idaho — the fact that there’s coverage isn’t all that surprising.

“I’m not someone who likes to throw it into people’s faces because it’s a shocker,” Harrington, 47, said about her atheism. “The first thing they say is, ‘Oh, you’re so nice.’ ”

[David] Bohart said during much of his life it was hard to find information about atheism or find other atheists. But he said the Internet changed that.
The Nampa group wants to offer a community for young atheists, too, [Art] Rigsby said.

“A lot of kids take a lot of heat because the don’t believe,” Rigsby said. “Younger kids really feel like they’re out there by themselves. Hopefully we’ll give them a feeling that, hey, you belong to a community and people care about you.”

The Idaho Press-Tribune linked to the article on Facebook, and the first few comments give you a sense of what atheists there are up against: 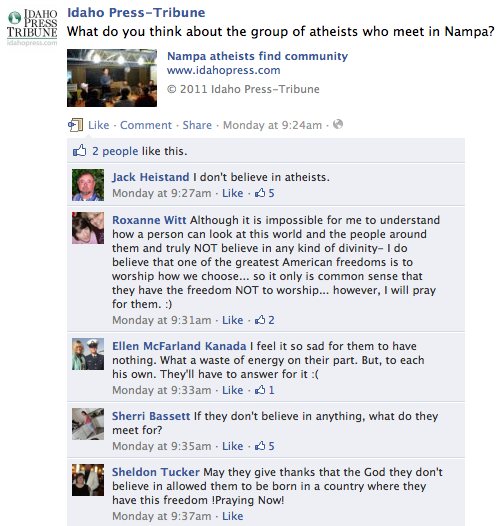 Not very promising… but it’ll make you feel better to know that there are a *ton* of atheist groups in the area. Here’s a snapshot of the larger ones I could find. If you’re living in the state, consider checking them out!

November 23, 2011 Are Your Beliefs Separating You from Your Family Over the Holidays?
Browse Our Archives
What Are Your Thoughts?leave a comment