When Your Banks Speaks in Christianese November 22, 2011 Hemant Mehta

When Your Banks Speaks in Christianese

Reader Anju was chatting online yesterday with a customer service rep from Bank of America. This is how the conversation ended: 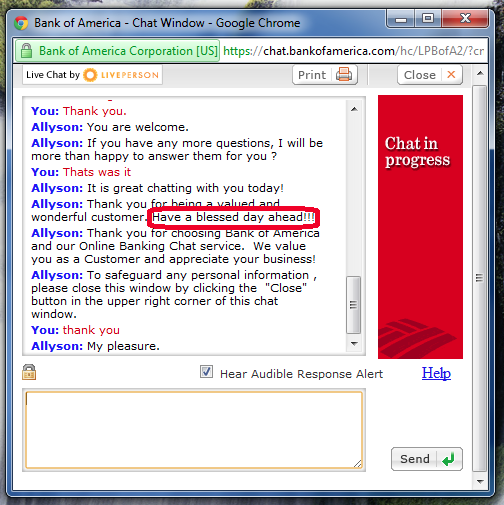 It’s not a huge deal, but since so much of that conversation is boilerplate script, I wonder if that line was approved by BoA or if it was just some personal flair…

Assuming it’s the latter, how would you have responded? I figure most of you would have just shrugged it off — she meant well and it’s nothing more than that — but would anyone take offense to that? How about when someone says that to you in a real-life conversation?

November 22, 2011
Campus Atheist Group Raises Money for the War on Hunger
Next Post

November 22, 2011 Atheist Billboards Go Up in Columbia, South Carolina
"Come on, don't be so hard on yourself; the internet universe would be a better ..."
CorporalKlinger Rick Wiles: A “Satanic Zionist Power” ..."
"It’s Wyoming....say no more."
Fred Rickson WY Lawmaker Sinks Suicide Education Bill ..."
"Are you telling us you think the sun doesn't really go around the earth and ..."
jomicur Everything Wrong With Exodus 1 in ..."
"Rush Limbaugh and Generalissimo Franco are still dead."
Akira625 Rick Wiles: A “Satanic Zionist Power” ..."
Browse Our Archives
What Are Your Thoughts?leave a comment