Remember how the Mid Ohio Atheists said they were going to put up the following billboards?

That second billboard was inspired by a local church (that put up a billboard with the same message). Both were supposed to go up next week…

But now we have a problem. The company tasked with getting the billboards in place say they no longer wants to put them up:

Michael tells the story this way:

We contacted LIND Billboard Company and worked with a very Nice Sales Rep named Kristin Yoshioka. We spent several weeks exchanging emails, planning locations, and reviewing the graphics for the Billboards. In late October everything was ready to go. They had the final Graphic, had done the mock ups and we had approved them. Everything seemed to be going off with out a hitch and I was extremely pleased with the company.

Earlier today, though, MOA President Ron Stephens received this email from Maura Siegenthaler, the Vice President of the LIND Media Company, letting him know the billboards were not going to go up: 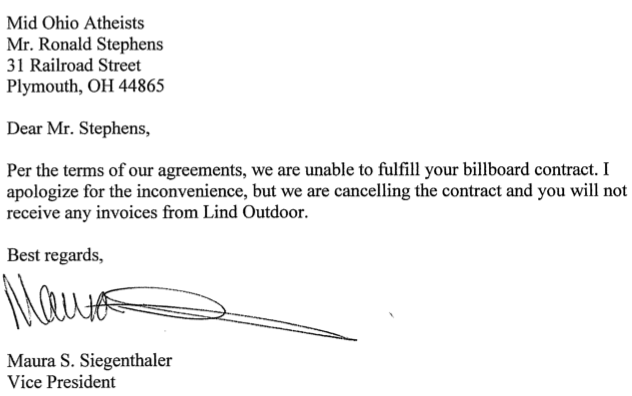 That’s it? They’re canceling the contract weeks after planning everything out and that’s all she can muster? No explanation? No nothing?!

Why would they do that? What was wrong with the billboards that no one seemed to notice until just now?

Stephens asked and Siegenthaler sent him a follow-up email:

The content of the proposed displays was supposed to have been approved beforehand by senior management at Lind, but unfortunately was not. When the content of your proposed displays did recently come to the attention of senior management, it was felt that a legal opinion was needed as to whether the content of the proposed displays might constitute a violation of the terms and conditions of Lind’s lease agreements for the billboard structures at which the posters would be displayed. Legal counsel determined that such displays could constitute a violation of such lease terms and conditions. Moreover, the inflammatory nature of the proposed displays would no doubt be considered offensive to much of the community and would be harmful to Lind’s community reputation and goodwill. Lind has always and will continue to reserve the right not to publish advertisements which, in its sole opinion, are obscene, unnecessarily offensive and/or not in the best interests of the community at large. We regret any inconvenience this might have caused your organization and Lind will bear the costs it has already incurred in the production of the displays without charge.

So our billboards are inflammatory. The one that lets other religious skeptics know they’re not alone is somehow that awful. The one that calls on people to be skeptical of what they hear — with the exact same wording used by a local church’s billboard just recently — is not good enough for them.

Meanwhile, LIND has been approved other ads like this one: 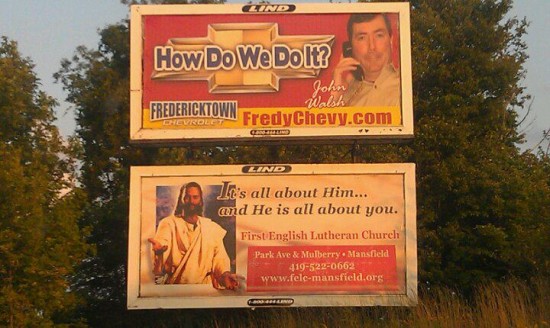 If we’re obscene and offensive, surely the Jesus one has to be even worse, right?

Michael has the contact information for the LIND folks at his site. Give them a call or send them a note letting them know there’s nothing inflammatory about getting people to question their beliefs.