This is a guest post by Cate Laskovics. Cate is the president of the Secular Alliance at the University of Pittsburgh. For more background on this article, click here.

Yesterday afternoon, more than twenty students from three different universities came together to support nontheistic and secular students at Duquesne University in Pittsburgh who are being denied the ability to form a secular club on their campus. 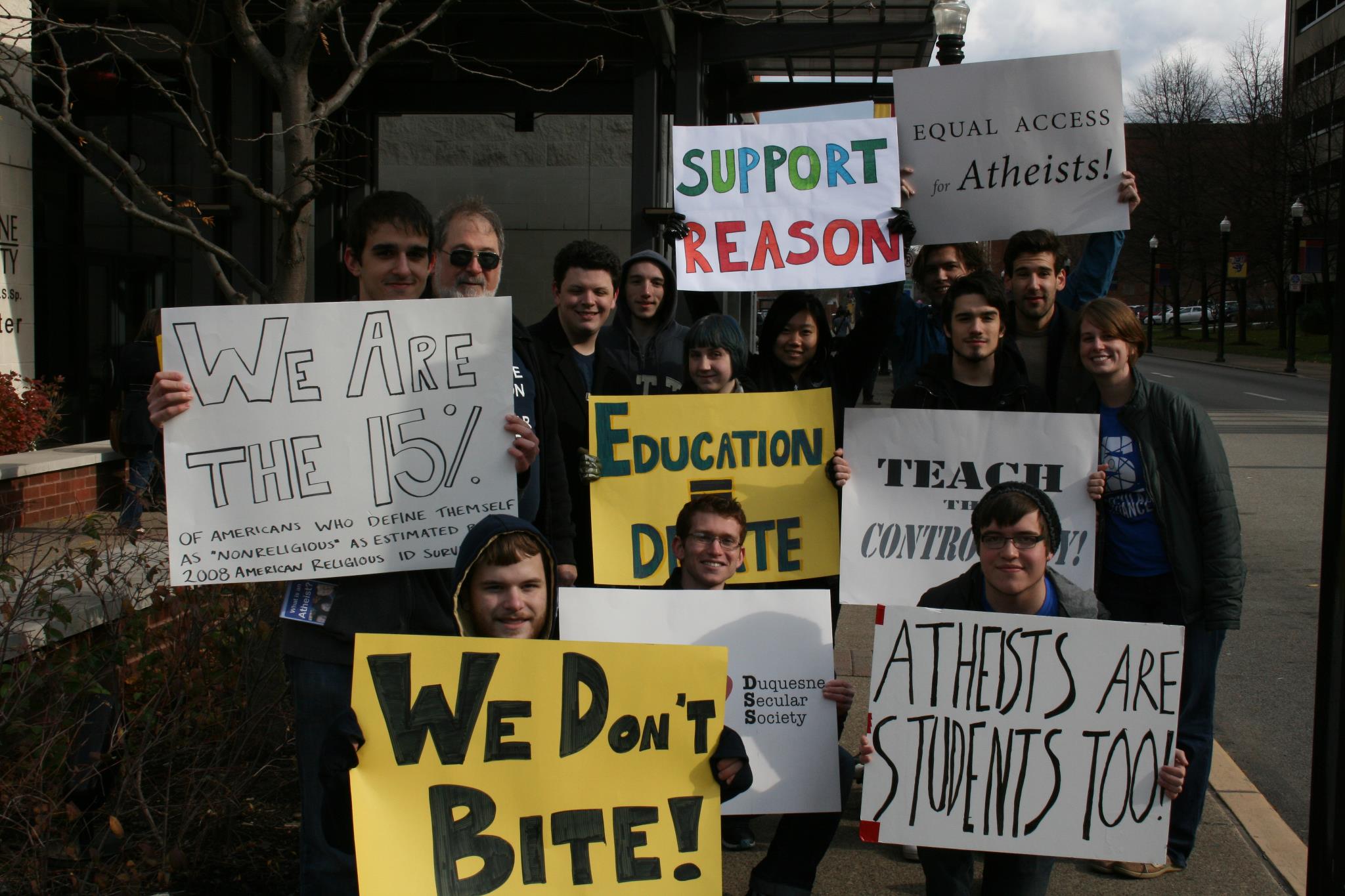 Some backstory: On November 1st, Nick Shadowen, a senior at Duquesne, submitted the Duquesne Secular Society constitution for approval by the Student Government Board Organization Oversight Committee. On November 7th, the constitution and formal recognition were denied.

The Secular Alliance at the University of Pittsburgh got wind of this denial and was disappointed that Duquesne students would be deprived of the amazing benefits that a secular club can provide: Open and honest discourse, a safe space to express ideas and beliefs, and the sense that your university supports you even though they may disagree with you.

Feeling the need to act, we organized a protest to promote awareness of the denial of the Duquesne Secular Society and what Duquesne was missing out on. Although it was only 37 degrees outside, students from Duquesne, Pitt, and Carnegie-Mellon stood for an hour (from noon to 1:00p) attempting to show real faces of nonbelief, that of average college students. The protest went without incident, and the police that arrived were respectful.

While Duquesne is a Catholic university, it nonetheless has a Muslim student group, a Jewish student group, and a gay/straight alliance. Shadowen had hopes that Duquesne would stick to its commitment to diversity and accept the presence of a secular group to enhance this diversity. He said, “Anyone who has opened a newspaper at any point in their lives knows that religion is a serious topic that continues to impact our world. It is the role of any university, religious or otherwise, to provide an environment conducive to the discussion of serious topics.”

Since the group is not allowed to promote itself on campus, it is tough to judge just how many other Duquesne students would support or join the Duquesne Secular Society. However, junior Colin Strager-Rice, co-organizer of the DSS, was optimistic about how the protest went: “The purpose of the event was to increase the DSS’ presence to the student body and, hopefully, provide an incentive for the SGA to reconsider their decision. At this point, I don’t think we can rightfully spectate on the ‘success’ of the event. Only time will tell. That being said, we got our message out to a lot of people today. The individuals I talked to were very responsive and didn’t seem likely to brush our message off.”

***Update***: A spokesperson for the school explained Duquesne’s decision this way:

“All students are certainly welcome here. But, formally recognizing a student group whose main purpose is opposition to belief in God is not aligned with our mission,” said Bridget Fare, a Duquesne spokeswoman.

November 18, 2011 Pastor Covers Up Rape, Makes Victim Apologize, Gets Invited to Join Christian School's Board of Trustees
Browse Our Archives
What Are Your Thoughts?leave a comment