Pastor Covers Up Rape, Makes Victim Apologize, Gets Invited to Join Christian School’s Board of Trustees

Pastor Chuck Phelps heads up Trinity Baptist Church in Concord, New Hampshire and he played a key role in covering up the rape of a 15-year-old girl in the church. Not only did he try to keep it hidden, he made the girl apologize to the congregation:

The victim said Phelps told her she would be put up for “church discipline,” where parishioners go before the congregation to apologize for their sins.

She asked why. “Pastor Phelps then said that (Willis) may have been 99 percent responsible, but I needed to confess my 1 percent guilt in the situation,” the victim told the police.

“He told me that I should be happy that I didn’t live in Old Testament times because I would have been stoned.”

It gets worse. He later “sent her away with her mother’s help to another… church in Colorado where she would have her baby and give it up for adoption away from friends and family, and allowed the rapist to remain in the church.”

Turns out he was invited to join the (ultra-fundamentalist) Bob Jones University Cooperating Board of Trustees (PDF) and he accepted the position:

Phelps spent months lying to many people’s faces, he up a website to commit libel against a victim of rape, verbally slandered the victim all over the country, lied to the media, both lied to and about the police. Apparently this kind of behavior is ok for a Cooperating Board member of Bob Jones University. It’s apparently fine for a board member to do so, but a student would be expelled for much less.

A groups of BJU students is demanding that he step down. They’ve even started a petition and a Facebook group requesting his removal.

They also want students on campus to wear red on December 12th to show their support in defiance of the school’s misguided decision: 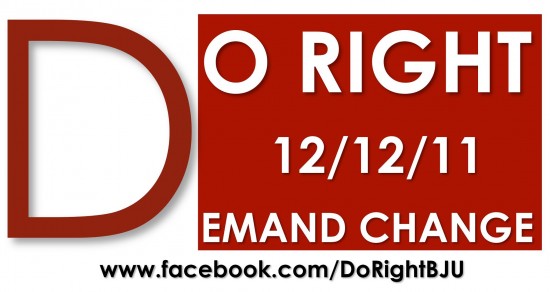 Even around pastors and Christian fundamentalists, he stands out as a despicable man who made poor decisions for awful reasons. There’s no reason to believe he’s a changed man. He’s done enough damage. Get him off that board before he finds a way to ruin even more people’s lives.

November 18, 2011 I Hope Some Confused Catholics Showed Up...
Browse Our Archives
What Are Your Thoughts?leave a comment