Researchers at the University of Minnesota told us in 2006 (PDF) that “atheists are less likely to be accepted, publicly and privately, than any others from a long list of ethnic, religious, and other minority groups.”

But why is that the case?

University of British Columbia psychologist Will Gervais along with his colleague Ara Norenzayan and Azim F. Shariff (U of Oregon) think they have the answer: “anti-atheist prejudice is particularly motivated by distrust.”

They make their case in the November 7th edition of the Journal of Personality and Social Psychology.

Religious individuals may use the religious beliefs of others as just such cues: Religiosity may be viewed as a proxy for trustwor- thiness, particularly by religious believers… Indeed, people may even preferentially trust members of other faiths, to the extent that the other individuals are seen as fearful of their own deities’ displeasure. Sosis… argued that religious signals of trustworthiness can be coopted by members of other religious groups and notes, for example, that Mormons are viewed as particularly trustworthy nannies by non-Mormon New Yorkers… and Sikhs are viewed by non-Sikhs as trustworthy economic partners… In at least some situations, observers use commitment to even rival gods as signals of trustworthiness.

Matters are different for atheists, however. If belief in moralizing gods is used as a signal of trustworthiness, it follows that those who explicitly deny the existence of gods are not merely expressing private disbelief; they are also sending the wrong signal.

How do you test something like this? The researchers use a variety of methods and a few of the highlights are below.

There’s a classic study in which subjects are told about Linda, “an outspoken and politically active single woman.” Knowing that — and nothing else — about her, is it more likely that Linda is (a) a banker or (b) a banker and a feminist?

It’s mathematically guaranteed that (a) is more likely than (b). And yet, most participants choose (b). It just feels more correct. That’s called the “conjunction fallacy.”

Knowing that people will commit that fallacy, the researchers used it to their advantage to test their hypothesis about distrust.

They had over 100 participants read the following passage:

Richard is 31 years old. On his way to work one day, he accidentally backed his car into a parked van. Because pedestrians were watching, he got out of his car. He pretended to write down his insurance information. He then tucked the blank note into the van’s window before getting back into his car and driving away.

Later the same day, Richard found a wallet on the sidewalk. Nobody was looking, so he took all of the money out of the wallet. He then threw the wallet in a trash can.

Anyway, about a quarter of the subjects were then asked what was more likely: That Richard was (a) a teacher or (b) a teacher and a Christian?

Other subjects were given the options of Richard being (a) a teacher or (b) a teacher and a Muslim?

Others had to decide if Richard was (a) a teacher or (b) a teacher and a rapist?

Finally, the last group had to decide if Richard was (a) a teacher or (b) a teacher and an atheist?

How did that play out? 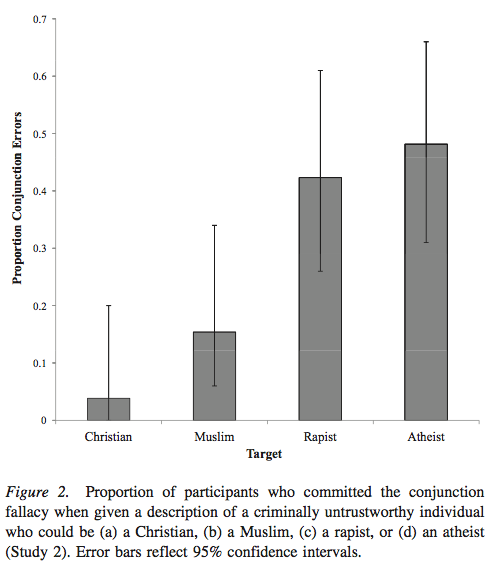 Not very well for us.

In sum, participants frequently committed the conjunction fallacy when given a description of an untrustworthy person and a target who could be an atheist or a rapist but not for targets who could be a Christian or a Muslim…

… this implies that a description of an untrustworthy person is not viewed as representative of religious individuals, be they Christian or Muslim. On the other hand, this description — of an individual who commits insurance fraud and steals money when the chances of detection are minimal — was only seen as representative of atheists and rapists, and people did not significantly differentiate atheists from rapists.

Somehow, we’re less trusted than even rapists. That’s disheartening, but it really says more about how religious people think than anything about atheists.

The researchers then ran a similar experiment, this time replacing “Richard” with “Sarah.” They asked participants whether Sarah was more likely to be (a) a teacher or (b) a teacher and a XXXX (where XXXX was a Jewish person, a feminist, or an atheist).

We didn’t fare any better given the new options. 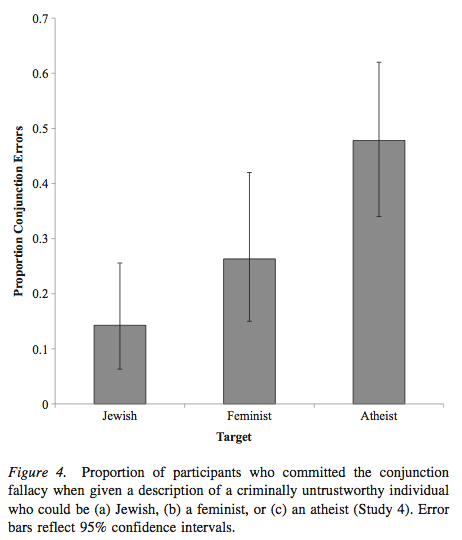 Consistent with our theoretical framework, untrustworthiness was viewed as more representative of atheists than of either feminists or Jewish people…

Despite the relative frequency of atheist participants in our samples, atheist targets were still the least trusted in [this study].

In another study, participants were given nearly-identical descriptions of an atheist and a religious person. They were then asked “which of the two candidates they would hire as either a daycare worker or a waitress.” The daycare worker was considered a “High Trust” job while the waitress was seen as a “Low Trust” job.

Turns out people would rather leave their children with the religious person: 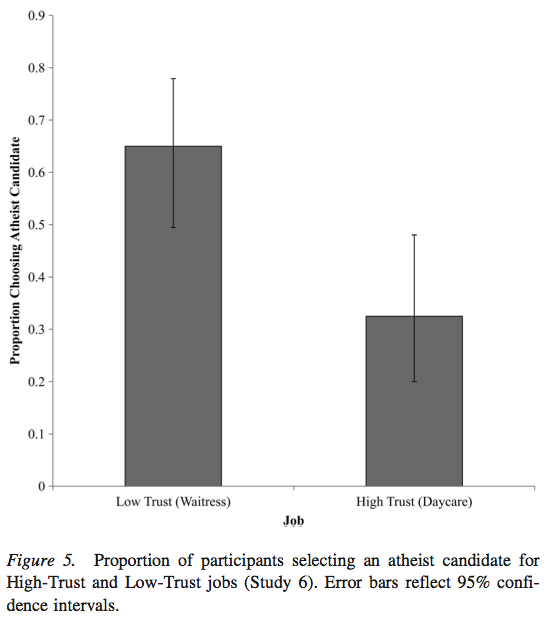 So what did the researchers conclude from all this?

Atheists are among the least liked groups of people in many parts of the world, and the present studies help to explain why. The present six studies converged on the conclusion that distrust is at the core of this particularly powerful, peculiar, and prevalent form of prejudice.

Let’s say all of this is accurate. How do we counteract the negative perceptions about us?

First, we have to continue doing community service — serving at food banks, donating to charity, giving blood, etc. Show people that we can be good without god.

Second, we have to let people we trust know that we’re atheists. People think poorly of atheists because they don’t think they know any. It’s a shock to their system when they find out someone close to them doesn’t believe in a god… so shock them! Let them know that someone they already trust is an atheist.

Those two things would do more to reverse the results the researchers found in these studies than anything else I can think of.

November 15, 2011
Penn State's Scandal Cannot Be Prayed Away
Next Post