He Makes Sense To Us Because We Don’t Dare Question Religious Authority November 15, 2011 Hemant Mehta

Capt. Ryan Jean is the atheist who’s trying to become a “Humanist lay leader” in the Army. It’s not quite the role an official Chaplain would have — he wouldn’t even get paid — but it’d give him the opportunity to facilitate discussions about religion with Foxhole Atheists who aren’t being serviced by religious chaplains.

Father Jonathan Morris knows nothing about that distinction. Hell, he doesn’t even know what this story is about. He keeps complaining about how atheists want to become chaplains — something Capt. Jean’s story isn’t even about — and completely ignores the real reasons we want someone in that position: Religious chaplains don’t understand how to reach out to people like us. They do a piss-poor job of addressing our needs because they always invoke the supernatural. 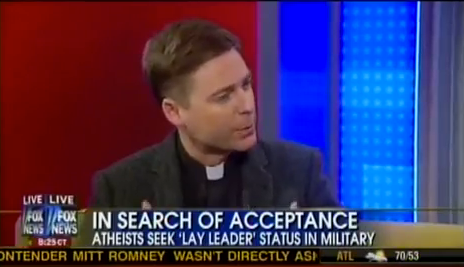 Craig James, on the other hand, knows exactly why we need atheist chaplains:

On the face of it, an atheist chaplain does seem a bit odd. But the truth is that chaplains provide a wide array of spiritual, emotional, philosophical, psychological and social services to our men and women in arms. The military is a place where men and women are taken from normal society, taught how to shoot guns and drop bombs, and then sent off to foreign countries to kill and injure other human beings. They’re separated from parents, sisters and brothers, husbands and wives and even their own newborn babies. These soldiers, some still teenagers, are ill-equipped to handle the moral, psychological and social traumas that they’ll face while serving our country.

The Chaplains in our military are the first and best resource that these young soldiers turn to for help when faced with the awful reality of war. Yet Father Jonathan Morris seems to think that atheist and agnostic soldiers don’t deserve the critical services of a chaplain.

None of that matters to Father Morris. He can’t get over why these atheists want a chaplain! And he appeared on Fox & Friends to complain about it:

It’s amazing how the folks at FOX News couldn’t even bring themselves to invite Capt. Jean or a Foxhole Atheist to represent the other side of the story… nope. Just a one-sided discussion and an awful one at that. The hosts’ reaction to Morris is just a sad sight to behold.

It doesn’t matter to me if you call them Chaplains or not, but there’s no reason to deny atheist soldiers a service that every other soldier has access to. The more we fight for one, the quicker we’ll get one.

November 15, 2011 Catholic Charities Drops Lawsuit Against State of Illinois, Ending Their Discriminatory Adoption Practices
Browse Our Archives
What Are Your Thoughts?leave a comment