Hasidic Bus Company: Ladies, Sit in the Back of Our Bus November 15, 2011 Hemant Mehta

Hasidic Bus Company: Ladies, Sit in the Back of Our Bus

Private Transportation Corporation, a hasidic-owned company that operates a public bus line between two Yiddish communities, has special instructions for its female riders:

Go sit in the back of the bus because the front is reserved for men.

You probably wouldn’t know this, either, because the English portion of their brochure says that “When boarding a crowded bus with standing room only, women should be allowed to board first.”

Ok, fine… but then you look at the Yiddish part of the brochure and it says something completely different: 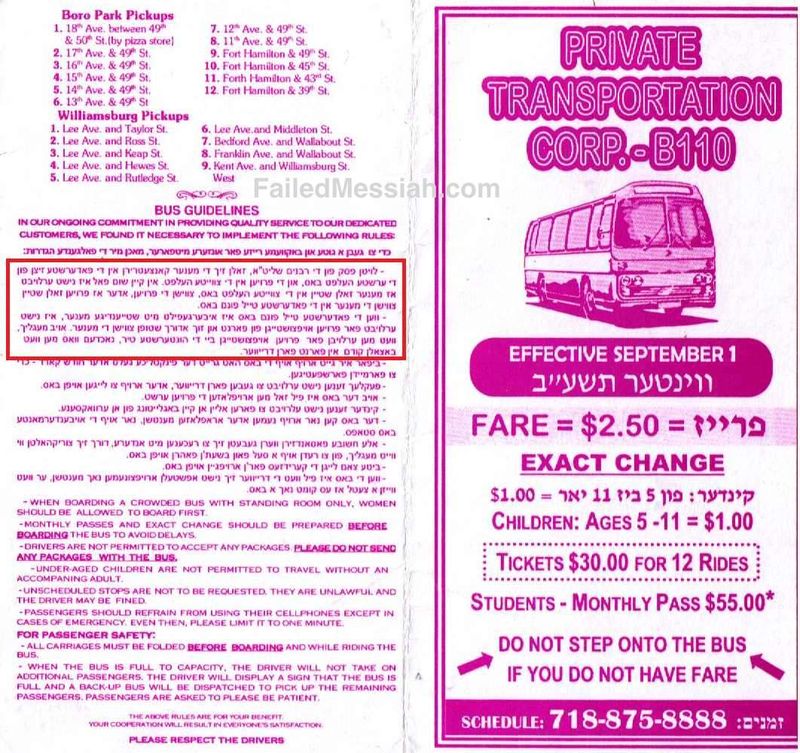 When the front part of the bus is crowded with standing men, women are not allowed to board the bus from the front entrance in an attempt to push through between the men [to get to the back of the bus]. If possible, women will be allowed to enter the bus through the back door, after they paid first in front to the driver.

How are they still receiving taxpayer money for this…?

The company denies any discrimination. (What, they can’t read Yiddish?) But it would be fun to see what would happen if a woman boarded the bus and sat right in the first row…