The National Catholic Reporter has put out their fifth survey cataloguing Catholic attitudes and practices in America.

We should be throwing a party to celebrate these results.

When asked what aspects of Catholicism are important to them, most Catholics fall in line with typical Christian teachings, but they take a Honey Badger approach to what the Vatican tells them. In fact, only 30% of Catholics say “Vatican authority” is important to them. What about priestly celibacy? Not a big deal — only 21% think it’s relevant. Even opposition to gay marriage and opposition to abortion scored 35% and 40% in terms of “importance,” respectively.

Although the Vatican and the U.S. Conference of Catholic Bishops have been highly involved over several decades in articulating the church’s opposition to abortion, fewer than half of American Catholics, 40 percent, say that the church’s teachings opposing abortion are very important to them personally. And even fewer say that the church’s opposition to same-sex marriage (35 percent) and the death penalty (29 percent) are very important. Similarly, Catholics also see the current structure of the church, despite its centuries-old tradition, as relatively unimportant to their identity as Catholics.

To corroborate that, Highly Committed Catholics (“those who said that the church was the most important or among the most important parts of their life, [and] who attended church once a week or more often”) were asked whether one could be a “good Catholic” even if you didn’t follow Church teachings on certain issues…

For example, can you be a good Catholic even if you use birth control? The Pope says no. But 60% of the serious Catholics say yes! (That’s a slight drop from 2005, but it’s still a *huge* percentage.)

Here’s an important one: When you have questions about sex, homosexuality, contraception, abortion, or divorce, who has the final say in what’s right and wrong?

Fewer than 20% of Catholics look solely to the church for moral guidance in these matters! In most cases, more than half of all Catholics just figure it out on their own. (And sometimes, they trust both themselves and the Church Leadership.) But isn’t that great? The Church isn’t seen as the arbiter in all things right and wrong! They’re just one voice out there — and one that’s losing ground. They’ve made so many blunders in the past that even their own sheep won’t look to them when grappling with major social issues. 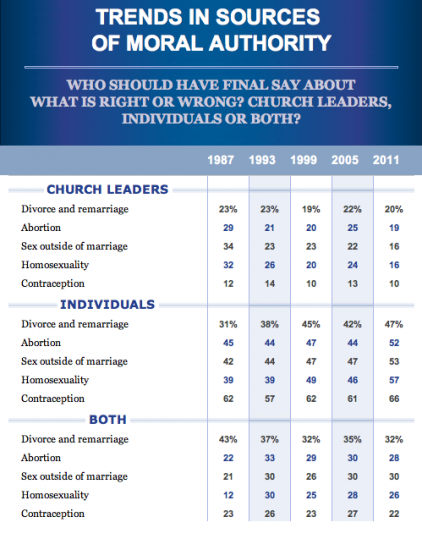 What about the Eucharist? Do Catholics understand that they’re supposed to believe the bread and wine actually become the body and blood of Christ?

50% of Catholics don’t even know that. They think it’s only symbolic. In other words, half the Catholics in America don’t know one of the most important beliefs about their own faith.

But maybe it’s not surprising that religious people don’t understand their own religions. In fact, if they did, most would probably laugh it off. (“There’s no way my faith is that crazy.”)

So they asked Catholics a question, “Do you believe that at the consecration during a Catholic Mass, the bread and wine really become the body and blood of Jesus Christ?” Forget the Church’s teachings. Do you believe that happens? 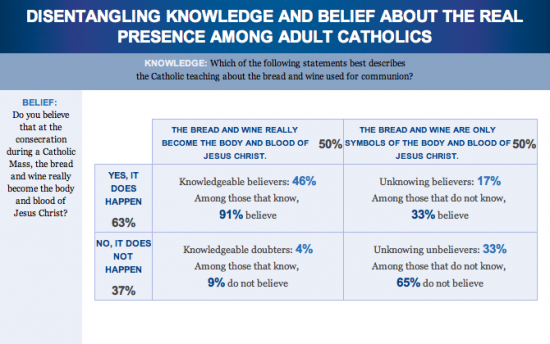 So what does all this data tell us?

We’re living in a world full of Cultural Catholics — Cafeteria Catholics — who pick and choose what parts of the faith they can accept and which are expendable. They don’t buy into the Church’s outright lies, but they might appreciate a lot of the spiritual guidance. They have that “special feeling” when they walk into a church, even if they don’t believe everything the priest tells them. They like the community, but not the bullshit. They know Church thinking is stuck in the past but they’re moving forward with the times despite clinging to the Catholic title — even if there’s a contradiction there.

It also means those of us who criticize the Church, point out the obvious lies, mock the silly beliefs, castigate the Church for its moral failings, and make the case for secular alternatives to the supposed “benefits” of religion are doing a wonderful job.

We still have a long way to go but it’s wearing off on a lot of Catholics.

Eventually, maybe they’ll muster up the courage to shed the label entirely.