You’ll Want to Enlarge This Image 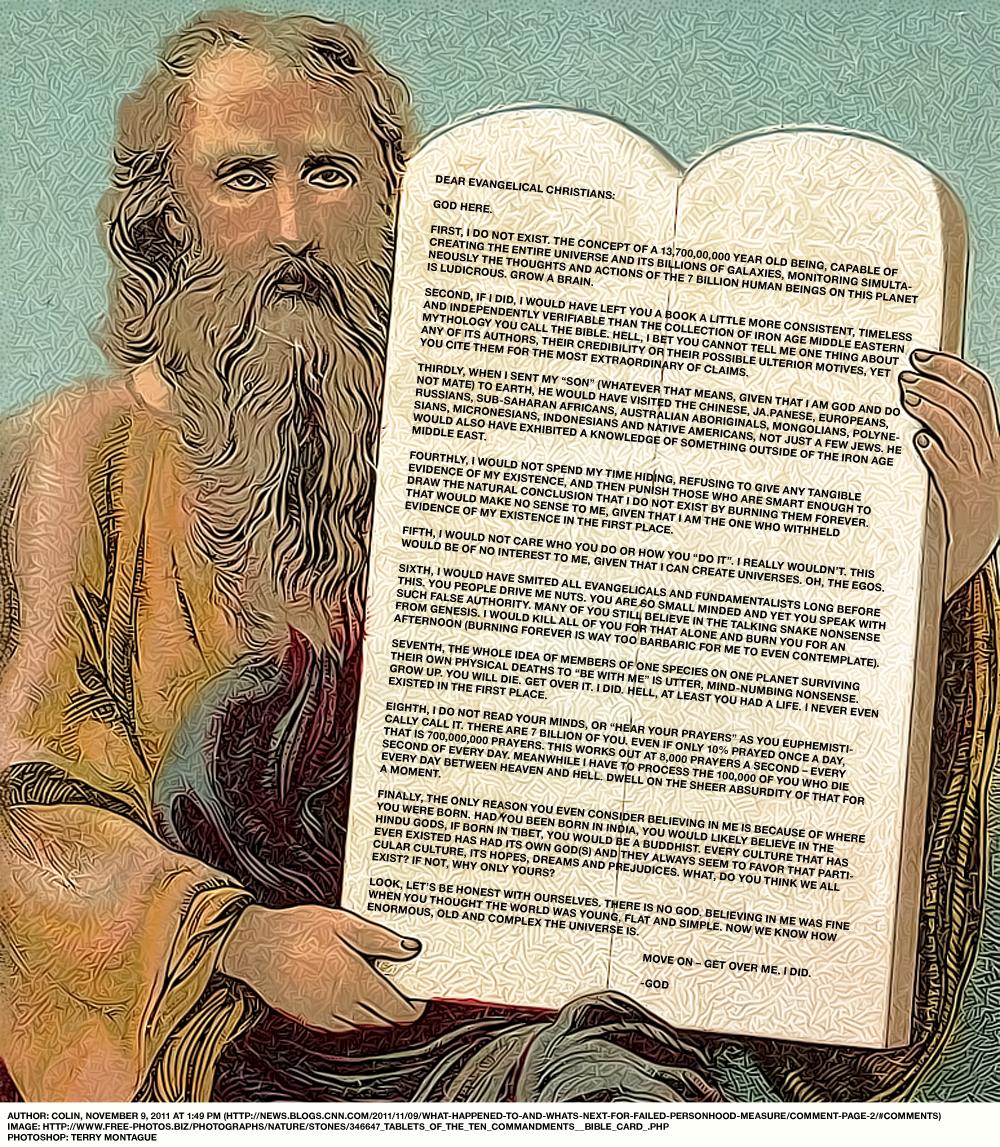 First, I do not exist. The concept of a 13,700,000,000 year old being, capable of creating the entire universe and its billions of galaxies, monitoring simultaneously the thoughts and actions of the 7 billion human beings on this planet is ludicrous. Grow a brain.

Second, if I did, I would have left you a book a little more consistent, timeless and independently verifiable than the collection of Iron Age Middle Eastern mythology you call the Bible. Hell, I bet you cannot tell me one thing about any of its authors, their credibility or their possible ulterior motives, yet you cite them for the most extraordinary of claims.

Thirdly, when I sent my “son” (whatever that means, given that I am god and do not mate) to Earth, he would have visited the Chinese, Japanese, Europeans, Russians, sub-Saharan Africans, Australian Aboriginals, Mongolians, Polynesians, Micronesians, Indonesians and native Americans, not just a few Jews. He would also have exhibited a knowledge of something outside of the Iron Age Middle East.

Fourthly, I would not spend my time hiding, refusing to give any tangible evidence of my existence, and then punish those who are smart enough to draw the natural conclusion that I do not exist by burning them forever. That would make no sense to me, given that I am the one who withheld evidence of my existence in the first place.

Fifth, I would not care who you do or how you “do it.” I really wouldn’t. This would be of no interest to me, given that I can create universes. Oh, the egos.

Sixth, I would have smited all evangelicals and fundamentalists long before this. You people drive me nuts. You are so small minded and yet you speak with such false authority. Many of you still believe in the talking snake nonsense from Genesis. I would kill all of you for that alone and burn you for an afternoon (burning forever is way too barbaric for me to even contemplate).

Seventh, the whole idea of members of one species on one planet surviving their own physical deaths to “be with me” is utter, mind-numbing nonsense. Grow up. You will die. Get over it. I did. Hell, at least you had a life. I never even existed in the first place.

Eighth, I do not read your minds, or “hear your prayers” as you euphemistically call it. There are 7 billion of you. Even if only 10% prayed once a day, that is 700,000,000 prayers. This works out at 8,000 prayers a second — every second of every day. Meanwhile I have to process the 100,000 of you who die every day between heaven and hell. Dwell on the sheer absurdity of that for a moment.

Finally, the only reason you even consider believing in me is because of where you were born. Had you been born in India, you would likely believe in the Hindu gods, if born in Tibet, you would be a Buddhist. Every culture that has ever existed has had its own god(s) and they always seem to favor that particular culture, its hopes, dreams and prejudices. What, do you think we all exist? If not, why only yours?

Look, let’s be honest with ourselves. There is no god. Believing in me was fine when you thought the World was young, flat and simple. Now we know how enormous, old and complex the Universe is.

First seen in a comment written by “Colin” here.