Would You Be Comfortable with an Atheist President? 2011 Survey Says… November 9, 2011 Hemant Mehta

Would You Be Comfortable with an Atheist President? 2011 Survey Says…

The headlines are focusing on how only 42% of Americans know Mitt Romney is a Mormon and how most Americans want to see a redistribution of wealth, but I’m most interested in the questions that involve people without faith…

Check out the left side of this chart for the response: 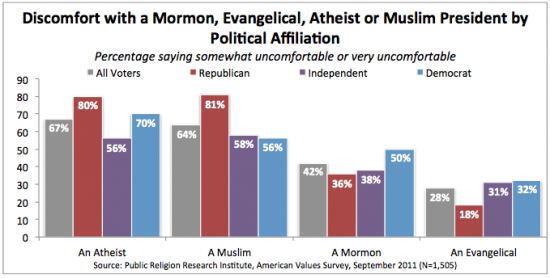 67% of all voters would feel somewhat or very uncomfortable with an atheist president.

So Democrats would be more uncomfortable with an atheist president than a Muslim president.

Republicans — not surprisingly, a higher proportion of them than Democrats — would be equally uncomfortable with both an atheist president and a Muslim president.

Overall, though, a non-theistic presidential candidate has a bigger hurdle to overcome than a person of any faith at all. It’s unbelievable that in this day and age, America still has this much of a hangup over a leader who would put more weight in evidence and logical thinking than in an imaginary god and ancient books.

(And how the hell are people more comfortable with Mormons than with us?! Their story is even crazier than that of evangelical Christianity!)

When the numbers were broken down fully (PDF), only 31% of those surveyed were very comfortable or somewhat comfortable with an atheist president (compared to 33% for a Muslim president).

While our numbers seem to be growing in every other conceivable way, we’re not making a lot of progress when it comes to how religious Americans perceive us. They still fear those of us who don’t believe in a god.

The best way to fix that, of course, is for more of us to come out publicly as atheists. When people know that someone close to them doesn’t believe in god — and is still a good friend, an honest person, a decent human being — it makes it that much harder to think badly of atheists right off the bat.