Why Can’t This Army Captain Be a Humanist Lay Leader? November 7, 2011 Hemant Mehta

Why Can’t This Army Captain Be a Humanist Lay Leader?

Capt. Ryan Jean isn’t trying to become a Humanist “chaplain” in the Army. He’s trying to become a “humanist lay leader — on a par with the lay Christians, Jews and Muslims who help military chaplains minister to the troops.” It almost seems like a stepping stone to the chaplaincy, a title would would carry more weight, come with a salary, and allow him to take on more responsibilities. 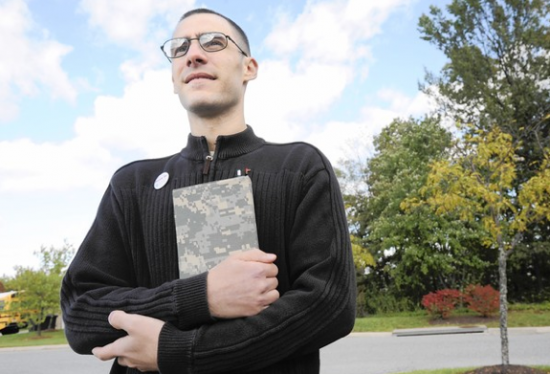 What spurred him to pursue this position?

Capt. Ryan Jean wanted to perform well on the Army’s psychological evaluation for soldiers. But he also wanted to answer the questions honestly. So when he was asked whether he believed his life had a lasting purpose, Jean, an atheist, saw no choice but to say no.

Those and other responses, Jean says, won him a trip to see the post chaplain, who berated him for his lack of faith.

“He basically told me that if I don’t get right with God, then I’m worthless,” said Jean, now an intelligence officer at Fort Meade. “That if I don’t believe in Jesus, why am I in uniform, because this is God’s army, and that I should resign my commission in order to stop disgracing the military.”

The disgraceful one in that story isn’t Jean…

And yet, the Army won’t even let him be a Humanist lay leader.

“The group that they want to be a lay leader for would have to be considered a recognized religious organization,” [Fort Meade] spokeswoman Mary Doyle said.

At least it’s not stopping some people from meeting off-base:

It was the search for such community that led Katherine Moore to form Atheists of Meade. The wife of an Army sergeant on the base, she had noted the success of organizations such as the Military Council of Catholic Women and the Protestant Women of the Chapel.

“I’ve heard they’re wonderful, wonderful groups that get together for the fellowship,” she said. “Well, I miss having that. I deserve that, too.”

Tech. Sgt. Larry Moore, Katherine’s husband, has served nearly 16 years in the military but says he has never experienced or witnessed discrimination against nonbelievers. Still, he supports Jean’s effort.

“Atheism doesn’t have a voice,” Moore said. “Having a lay person for atheists is important so that we have somebody to go to resolve any issues that may arise.”

***Edit***: The Atheists of Meade, incidentally, is part of the Military Association of Atheists and Freethinkers network. MAAF has an open letter to chaplains here — no responses have come in just yet.

This is what the military atheists have to do. Keep meeting, off-site if necessary. Keep the pressure on military officials to recognize them as an official group. Whenever possible, go public as a non-theist. And get the media to pay attention.

November 7, 2011
Once Again, Atheists Respond to Brother Jed's Bile with Mockery and Humor
Next Post

November 7, 2011 Ask Richard: Helping My Teen Son With His Profound Questions
Browse Our Archives
What Are Your Thoughts?leave a comment