Who Needs ‘In God We Trust’?

In case you missed it on Friday, Michael Shermer had an op-ed piece in the LA Times, arguing against “In God We Trust” as our national motto: 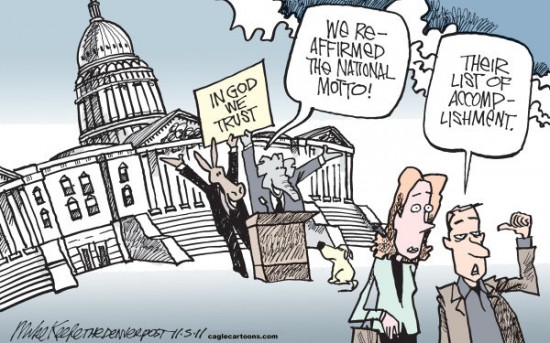 It’s time to drop the God talk and face reality with a steely-eyed visage of the modern understanding of the origin of freedom on which the United States was founded and continues to be secured. God has nothing to do with it. If you want freedom and security, you need the following:

The rule of law; property rights; a secure and trustworthy banking and monetary system; economic stability; a reliable infrastructure and the freedom to move about the country; freedom of the press; freedom of association; education for the masses; protection of civil liberties; a clean and safe environment; a robust military for protection of our liberties from attacks by other states; a potent police force for protection of our freedoms from attacks by people within the state; a viable legislative system for establishing fair and just laws; and an effective judicial system for the equitable enforcement of those fair and just laws.

Shermer states the obvious when he says God doesn’t need to be anywhere on that list.

I’d bet good money that most Christians who support the current motto have no idea why it’s our motto, when it became our motto, or what it even means.

For that last one, here’s a hint: It’s a platitude that means absolutely nothing but it makes Christians feel better about themselves.

November 7, 2011
Ask Richard: Helping My Teen Son With His Profound Questions
Next Post

November 7, 2011 We Are the Risk-Taking Monkeys
Browse Our Archives
What Are Your Thoughts?leave a comment