Were Any of our Presidents Closeted Atheists? November 6, 2011 Hemant Mehta

Were Any of our Presidents Closeted Atheists?

Melanie Cornell at the Illini Secular Student Alliance offers her take on which of our presidents might have been closeted atheists: 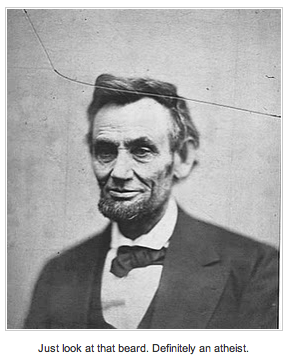 Considered Lincoln’s closest acquaintance, William Herndon attempted to describe the sheer complexity of Lincoln’s religious views, stating Lincoln was “at times, an atheist.” He also claimed Lincoln was a follower of Darwin (before it was cool). But Lincoln’s many speeches often contained references to the lord Almighty, providence, and all that jazz. Was it just a front?

November 6, 2011
Memo to FFRF: I Found a New Batch of Lawyers for You
Next Post

November 6, 2011 Why Do the Religious Reject Evidence?
Browse Our Archives
What Are Your Thoughts?leave a comment