Kimberly Winston of the Religion News Service shines an important spotlight on religiously-affiliated colleges who refuse to give recognition to campus atheist groups.

Take, for example, the University of Dayton (in Ohio), a private Roman Catholic school:

Late one night over pizza, University of Dayton students Branden King and Nick Haynes discovered neither of them believed in God.

Surely, they thought, they couldn’t be the only unbelievers at the Roman Catholic college.

Last year, King and Haynes and a couple of other like-minded students applied to the administration to form the Society of Freethinkers, a student club based on matters of unbelief.

The university rejected their application — and rejected them again in September. Without university approval, the group cannot meet on campus, tap a student activities fund, participate in campus events or use campus media.

Notre Dame and Baylor University have also rejected atheist groups this year — students at those schools are finding alternative/”underground” ways to get together. 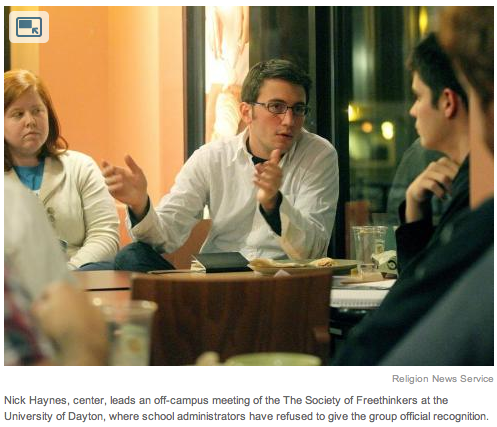 Before you start calling for lawsuits, let’s get the obvious out of the way. Aren’t these private, religious schools? Don’t they have a right to decide which campus groups get official recognition? Didn’t the atheist students on campus choose to attend these schools? After all that, should we really be upset about this?

A resounding “Yes!” to all of the above.

The same schools, by the way, allow Muslim groups and Jewish groups and LGBT groups to form — so why do they specifically choose to ban atheist groups?

Their reason: Muslim and Jewish groups believe in some sort of higher power… and while they don’t condone homosexuality, they believe they can still support LGBT students (In other words, “love the sinner but hate the sin”).

Why do atheist students attend these schools? A variety of reasons. It’s close to home, the professors are good, you got a scholarship, your parents pay for college and they wanted you to go there, they have a program in your field, etc. I went to a state school for college, but I went to DePaul — a Catholic institution — for grad school because they had a program that allowed me to get my teaching certificate at night, allowing me to work during the day.

Keep in mind that some private religious schools have had no problem with Secular Student Alliance groups:

California Lutheran University has an active group that regularly cooperates with religious groups on campus, and DePaul has a thriving group that meets with administration support.

“Once they realized we were not going to march on the president’s office demanding the de-Catholization of the university they were very amenable to our goals,” said [president of DePaul University’s Alliance for Free Thought Andrew] Tripp.

Also keep in mind that most SSA groups aren’t interesting in proselytizing about atheism. They want to hold debates, spark discussions about religion, be able to have conversations without censoring themselves, and do community service.

Who knew those goals went against the universities’ missions?

It’s kind of like the Boy Scouts of America. They’re a private organization, but they actively discriminate against gays and atheists in their ranks. Just because they can do that doesn’t make it right — and it doesn’t mean we can’t speak out against it.

(Some atheists have good reasons for wanting to be a part of the BSA — they do some awesome things… you know, aside from the outright bigotry.)

All we’re asking these colleges to do is provide atheists with the same opportunities they provide all the other students: A safe place for them to meet, promotional help for events when necessary, and access to money reserved for “official” campus groups.

Stifling serious conversations about a very important issue should be the antithesis of what goes on at any college. And I would argue that atheist groups nationwide have been better than groups of any other faith in sparking those discussions and getting people to think critically about faith.

We need to keep the pressure on these campuses.

November 5, 2011
Michigan Senate Says It's OK To Bully If It's In the Name of Jesus
Next Post

November 5, 2011 You Can't Take the Job Because of *That*?
Browse Our Archives
What Are Your Thoughts?leave a comment