Faced with the Threat of a Lawsuit, Indiana High School Removes Godly Sign

If you entered a sporting event at North Vermillion Junior/Senior High School in Cayuga, Indiana anytime in the past 43 years, you would’ve seen this sign as you walked into Gibson Field: Remember your Creator
in the days of your youth

That sign went up in 1968 and no one complained about it… until this year.

When they heard about the sign, the Freedom From Religion Foundation let the district know the sign was unconstitutional. The superintendent responded quickly:

That’s all it took?! Apparently so.

And now, the sign has been taken down. (No word on what the replacement will be just yet.) 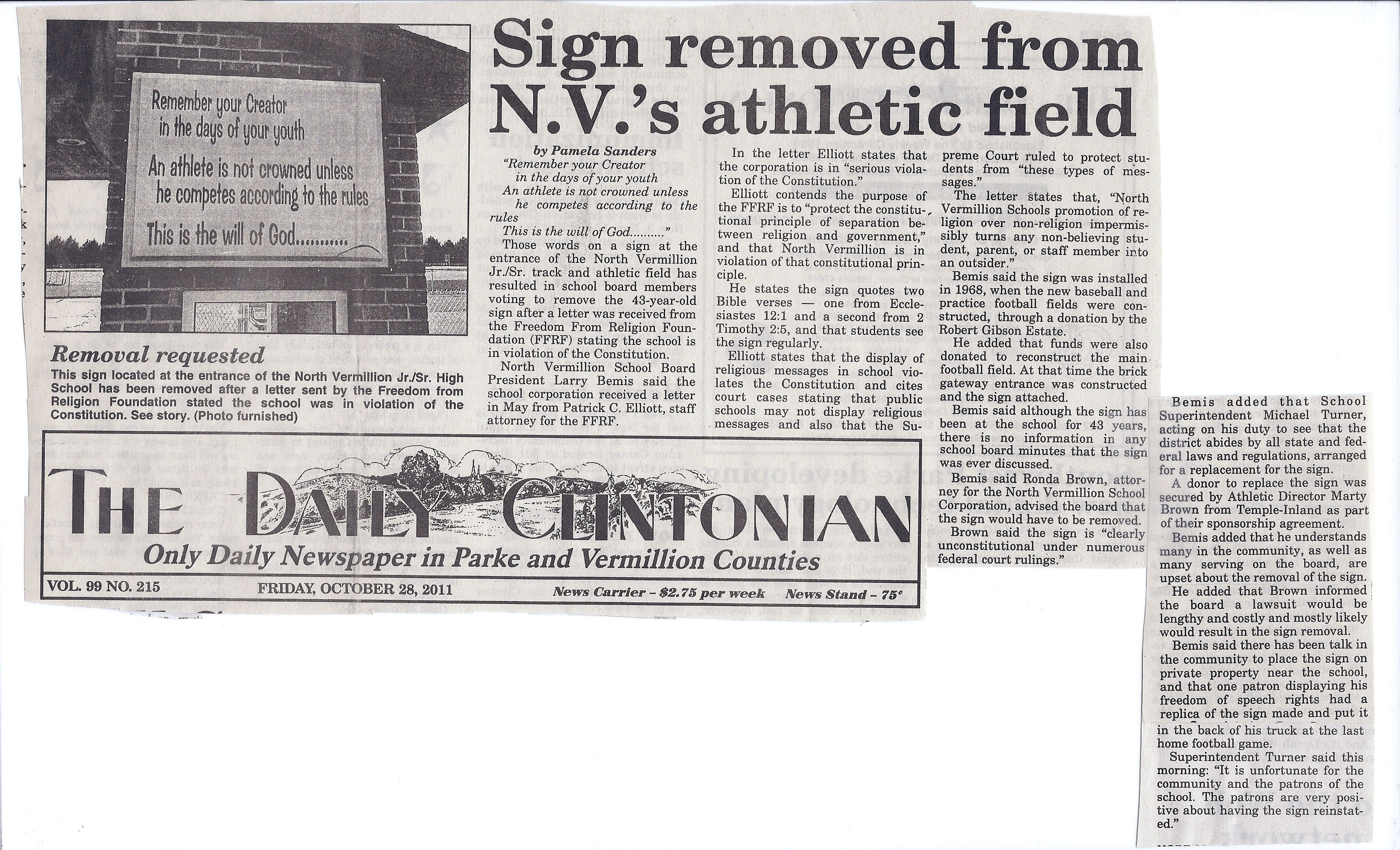 Already, the locals are complaining that the law ought to be subject to the will of the majority, rights of the minority be damned:

Another letter writer solved her own problem:

The sign has been removed. It can be taken away, but not the beliefs of many of us who attend events at North Vermillion. We can wear T-shirts with those same words on them. We can place a reproduction of the sign in the back of our truck and park it in the parking lot as one faithful patron did.

Yes! You can! You could always do that! We support you! But the school shouldn’t be in the business of endorsing the god you believe in. So good riddance to the “official” sign.

The sign never should have gone up. In fact, according to the article in The Daily Clintonian, there’s no official record of the school board ever voting for it to go up at all.

All it took for the sign to come down was the treat of a lawsuit the district knew it was going to lose.

(Thanks to Meg for the link!)

November 2, 2011
To Everyone Who Wants to Contribute to the Site...
Next Post

November 2, 2011 Shave the 'Stache for a Good Cause
"Figure out a way to waste another half a million."
larry parker FL County That Opposed Atheist Invocations ..."
"This is one of the primary reasons I object seriously to "religious" education--aside from the ..."
Connie Beane Christian Textbooks Are Already Rewriting the ..."
"It is almost like a religion to them."
muttpupdad Preacher: God Told Me Trump Would ..."
"This is standard operating procedure for evangelicals. My dad was a pastor. I’ve been hearing ..."
Recovering Ex-Conservative James Dobson Has Another Deranged Set ..."
Browse Our Archives
What Are Your Thoughts?leave a comment