A Safe Haven for Students Who Reject Religious Upbringing

This is a piece by Melia Robinson. Melia is a Syracuse University junior, dual majoring in magazine journalism and information management and technology. She is the design director of The Student Voice, a biweekly student-run news magazine, in which this piece originally ran. 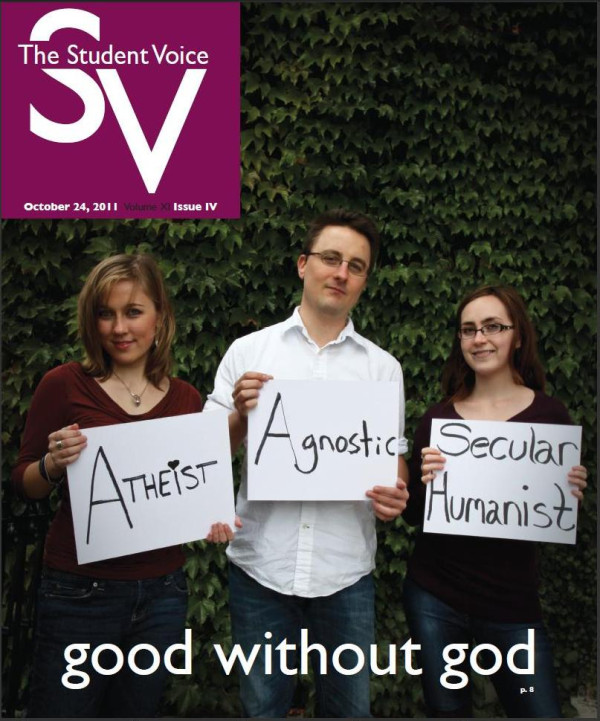 Lynde Folsom was a curious child. When she was four, she asked her mother that if God was all-powerful, why couldn’t he bring her pet frog back to life. A year later, she asked if she prayed enough to God, could she get wings. In the wake of Sept. 11, nine-year-old Folsom asked why people were killing each other over religion if religion is supposed to be peaceful. It made no sense, she said.

Frankly, Folsom didn’t believe in God. Her passion for science and years of asking questions led her further away from her family’s Catholic background. As a college freshman, Folsom found the Secular Student Alliance at Syracuse University and SUNY-ESF, and she never looked back.

Folsom, a sophomore neuroscience and philosophy major, followed a religious path not uncommon among college students, although she is one of a handful who openly identifies as atheist. At Syracuse University, incoming students are asked to complete a religious preference survey on MySlice where they indicate their affiliation. The results are somewhat misleading, as only 49 percent of the study body participates, according to the Dean’s Office of Hendricks Chapel. However, the sample indicates that the largest religious communities on campus — Episcopal/Anglican, Jewish, Presbyterian, United Church of Christ, and United Methodist — have all dipped between fall 2001 and fall 2011. Affiliation with Roman Catholicism, SU’s largest religious population, fell 9 percent.

The numbers at SU reflect a national trend in religious disaffiliation in people 18 to 29 years old, a February 2010 study by the Pew Research Center found. The report, titled “Religion Among the Millennials,” concluded that one in four adults under the age of 30 describe their religion as “atheist,” “agnostic,” or “nothing in particular,” compared to 14 percent of participants older than 30 who consider themselves “unaffiliated.” Members of the Millenial Generation are also more likely than older generations to switch religions or become totally unaffiliated, the study reported.

The relationship between the SU religious preference survey and the Pew study suggests that with each passing generation, more Americans are disaffiliating from their religious groups, and doing so earlier in life.

Tiffany Steinwert, the dean of Hendricks Chapel, understands why college is such a common backdrop for religious transformation. Many people at this age begin to question what they believe and why they believe it, Steinwert says. They’re often only familiar with the religious tradition of their parents, and suddenly, in the university environment, they can experiment with a diverse faith pool without pressure or judgment from their families.

“When they come to college, it’s a time for them to explore and to think about what’s most important, most meaningful in life,” Steinwert says. “It’s an opportunity to be exposed to traditions they might not have known existed.”

But for students who disaffiliate from the religious tradition of their upbringing, becoming an “Other” on the religious preference survey can mean different things. Unsubscribing to religion does not inherently make someone an atheist. In fact, 1,090 students responded “no religious participation” in the fall 2011 survey, but only 50 students identified as “Humanist, Agnostic, or Atheist.”

Atheism is the view that no gods exist, because the assertion of a god is an un-testable hypothesis, according to the national office of the Secular Student Alliance. Agnosticism is a diluted version of atheism, and holds that the existence of a god cannot be logically proved or disproved. “Non-theist” acts as an umbrella term, encompassing all the belief systems that deny the existence of a god or gods.

The negative connotation of “atheist” typically washes over these varying degrees of non-theism, and the fuzzy landscape of secularism can be unsettling for recent converts, according to Tarayn Ryan, president of the Secular Student Alliance at SU and SUNY-ESF. Members of SSA aim to mentor students who disaffiliate in college.

“There are a lot of people who, maybe in high school, played around with the idea that maybe there’s not a god. … Then they come here and they don’t know what to do with those thoughts,” says Ryan, a senior religion major. “So they need someone to guide them along.”

The labels of non-theism are shrouded in ambiguity, but the discrepancy between them represents a relatively insignificant obstacle in the way of the secular community. Students who come out as atheist or agnostic are sometimes confronted with hurtful stereotypes or hostility from their family or friends. It’s a pattern of harassment that prevents unaffiliated students from choosing atheism.

SSA founder James Johnson, a graduate student studying plant science and biotechnology at the SUNY-ESF, says over half of their fliers are vandalized or torn down, particularly on the SUNY-ESF campus. Various members recall being named a “Satan-worshipper,” being told their “existence as an atheist” was offensive, and being pounded with Bible verses.

Two weeks ago, SSA members chalked the Quad to promote the group’s recent name change from Atheist, Agnostic and Freethinkers Alliance. They wrote phrases like “good without god(s),” “got reason?” and “Don’t believe in God? You’re not Alone.” Overnight, someone crossed out their work and wrote insults over it. During the next SSA meeting, members discussed the vandalism and ways to calm down confrontational theists.

“I see this as an opportunity to confront the elephant in the room. People don’t like us because they don’t know us,” Davis said. “Many of us in the group hope to establish dialogues with religious groups in hopes of educating them that we are good, even without belief in a god.”

Dean Steinwert, who felt disturbed by the vandalism, said the Hendricks Chapel community is widely receptive to opening the conversation.

“This type of discrimination and prejudice violates the Ethical Framework by which all religious groups on campus agree to abide,” Steinwert said. “Hendricks Chapel has historically been a place where people of all faiths and no faith are equally welcomed and affirmed. … The interfaith table is incomplete without the voices of those who are atheist, agnostic or humanist.”

But in light of the vandalism and widespread ignorance, disaffiliated students may turn away from the path of atheism. One student, who asked his name not be used, remains closeted in his conservative workplace for fear of discrimination. The officers of SSA hope to liberate non-theist students from that fear of rejection.

“There’s an entire community waiting for them, [saying,] ‘I felt the same way you did, and now, I don’t feel any different!’” Folsom said. “I don’t feel any worse of a person, or any better. … I feel free in the sense that I’m not scared anymore, of admitting to it.”

Actively denying the existence of God, as atheism does, opens up a network of human connection, according to Folsom. It provided her with a group of like-minded people with whom she could belong. For students who want to explore a new faith tradition, abandon religion altogether, or don’t know what to believe, Folsom assures them that joining the secular community can be scary, but worth it.

“We’ve gone to the dark side, and there’s cookies here,” she said.

November 2, 2011 To Everyone Who Wants to Contribute to the Site...
Browse Our Archives
What Are Your Thoughts?leave a comment