Yesterday was a big day for American Atheists in court because they won a major court case. If you don’t know the details, here’s what you need to know to understand it:

This was always a risky lawsuit to file because, on the surface, it sounded like atheists were attacking fallen Highway Patrol Officers in Utah. Of course, the truth was far from that. The atheists had all the respect in the world for officers who died while on duty. But they felt it was inappropriate for a private group to put Christian crosses at roadside memorials, regardless of what the officers believed.

Especially when these were 12-foot-tall Christian Crosses.

Just to clarify some of the points lost in many news stories about this case, this was a private organization (Utah Highway Patrol Association) who put these 14 crosses on state land (11 times) and private property (3 times). On each cross was the beehive-shaped shield of the Utah Highway Patrol, a state entity.

The line had been crossed. This wasn’t just a private group putting up crosses. These were government-endorsed memorials.

What was the UHPA’s defense? This is what a spokesperson said five years ago:

According to Utah Highway Patrol spokesman Jeff Nigbur, “We chose the cross because the cross is the international sign of peace, and it has no religious significance in it.”

No religious significance. To a Cross. To this: 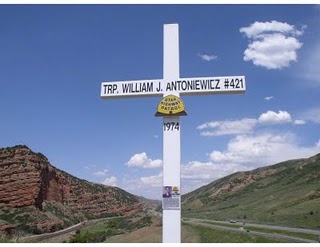 How could the group get away with that…?

American Atheists filed a lawsuit over this issue years ago. In 2008, the courts sided against them, saying the crosses were perfectly legal.

American Atheists appealed, and in 2010, the Courts ruled in AA’s favor. (Yay!)

A three-judge panel of the 10th Circuit U.S. Court of Appeals ruled Wednesday that the 14 large crosses would be viewed by most passing motorists as “government’s endorsement of Christianity.”

“We hold that these memorials have the impermissible effect of conveying to the reasonable observer the message that the state prefers or otherwise endorses a certain religion,” concluded the Denver, Colorado-based court.

Makes perfect sense. If a random observer saw the crosses, how could Christianity not cross her mind? Moreover, if she were driving at the speed limit, she wouldn’t even see the biographical information written on the crosses — only the symbol itself.

The Appeals Court said that just because crosses are common symbols used in roadside memorials, it didn’t mean they were secular symbols. The government had no business endorsing Christianity with their use of the crosses.

The Utah state government requested an en banc review in which all the judges in that courthouse would have heard the case. They were rejected.

Their only recourse was to take the case to the Supreme Court. Which is exactly what they did.

As you may have heard by now, yesterday, the Supreme Court decided not to hear the case.

That means it’s over. The ruling stands. The cross is indeed a Christian symbol and putting it up on roadside memorials is an illegal government endorsement of Christianity:

Dave Silverman, President of American Atheists noted, “We have no problem with honoring fallen troopers: they should be honored. Erecting divisive religious icons that violate the very constitution the fallen troopers had sworn to uphold is not the way to honor those troopers who gave the ultimate sacrifice for the citizens of their state.”

“It is our hope,” added Mr. Silverman, “now that the appeals process is over and the courts have found the crosses unconstitutional that the State of Utah will find a more honorable and non-divisive way to honor their fallen troopers. The fallen troopers, their loved ones and the citizens they swore to protect deserve such recognition.”

That’s the perfect response. Honor the troops, but not the crosses put up by State officials because they’re unnecessary and illegal. The Christian Right groups fighting on the side of the Utah Highway Patrol Association — isn’t that a dead giveaway that these were Christian crosses? — is trying to accuse the atheists of being insensitive to the officers, when our side had only respect for them:

“Justice is not well served when unhappy atheists can use the law to mow down memorial crosses and renew the suffering for the survivors,” said [Alliance Defense Fund] Senior Counsel Byron Babione.

Justice Clarence Thomas wanted to hear the case (PDF). He felt that “this case would have been a good vehicle for a major review and revision of Establishment Clause jurisprudence.” In other words, he wanted a chance to rule on this case so he could say crosses were not Christian symbols, thus allowing them to go up everywhere. Thankfully, no other justices agreed with him — at least four justices need to agree to hear a case before it goes before the Court.

Utah’s case will now go back to a federal judge in Salt Lake City for an order directing the state to take down the crosses. Brian Barnard, the Salt Lake City attorney representing the atheists, said that isn’t necessarily the only option. The crosses could be replaced with other monuments or moved to private land.

“We’ve said all along that these troopers should be honored, but let’s just do it in way that doesn’t violate the Constitution,” Barnard said. “If they want to put up a flag, an obelisk, a badge or some other symbol that is not religious in nature, they can do it and can leave them on public land. That would be fine, and it would comport with the 10th Circuit’s ruling and with the First Amendment.”

I don’t see any problem with a flag.

This was a risky case, but the atheists have handled themselves well. They made sure they constantly mentioned their respect for the officers. They stuck to the point about how the government shouldn’t be endorsing religion, and yesterday, they won the five-year-old argument.

November 1, 2011
Today, Congress Will Vote to Reaffirm 'In God We Trust' As the American Motto
Next Post