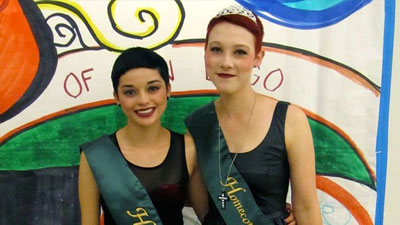 What a sign of the times. We already know that younger generations are more supportive of GLBT rights, but this goes above and beyond.

The two girls told ABC News that they’re thankful for the abundance of support they’ve received from family, friends, and students and staff at the school.

Arellano said one of her teachers told her, “Today school is a bit better because of you girls.”

Arellano’s Facebook wall is covered with congratulatory notes from her friends.

Check out the video as Haileigh was named Homecoming Queen to join her girlfriend — the crowd is chanting her name and cheering.  Be forewarned, it gets loud:

I admit, I choked up a bit reading about this story.

Sure, there were a few naysayers. But nothing the students couldn’t handle. Arellano, responding to some negative criticism, delivered some Truth (with a capital T) on her Facebook wall:

For all the girls who think tradition should be continued, go back to the kitchen, stop having sex before you’re married, get out of school and job system, don’t have an opinion, don’t own any property, give up the right to marry who you love, don’t vote, and allow your husband to do whatever he pleases to you. Think about the meaning of tradition when you use it in your argument against us.

Want hope for the country? This is what the younger generations are like.

(Image from the LA Times Courtesy of Rebeca Arellano)

November 1, 2011 Faith-Healing, Child-Killing Christian Couple Sentenced to Six Years in Prison
Browse Our Archives
What Are Your Thoughts?leave a comment