I Need to Find a Job at a Megachurch…

Take a look at this infographic about Christian megachurches from GOOD and Column Five. Not that you doubted it before, but pastors at those churches are making bank.

This is what they get for selling people false hope, convincing them that gay people aren’t deserving of equal rights, and ruining science and sex ed curriculums across the country. Sure, they might help people in some ways, but in other ways, they’re doing incredible amounts of damage. 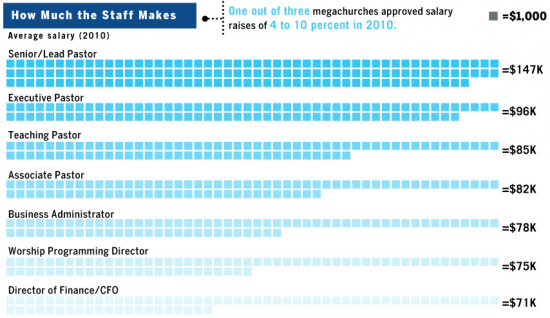 That’s only a portion of the larger image.

Keep in mind that these are average salaries, too. Some senior pastors are making *far* more than the $147,000 listed. That’s not even taking into account perks like IRS-approved housing allowances. (To be fair, the majority of pastors at non-megachurches probably make something close to the poverty line, if that.)

It’s their church and their congregations’ money, of course. They have a right to pay pastors whatever they want — or whatever is competitive, anyway. And there are plenty of other professions where people make ridiculous amounts of money when they probably don’t deserve it… but just keep this chart in mind when someone argues the big churches are anything but a corporation.

Megachurches are a money-making industry and business has been booming for decades.

October 31, 2011
Looking for a Contributor to FriendlyAtheist Update
Next Post

October 31, 2011 Celebrating Carl Sagan Day in Chicago
"Maybe this will change your mind. /shttps://twitter.com/joshtpm..."
larry parker McEnany: “I Never Lied” in the ..."
"OBVIOUSLY it refers to Lord Vader!"
Matri This Christian’s Theory About Juries Would ..."
"She has a point. If evolution is real, how to explain Marjorie Taylor Greene?"
Silverwolf13 GOP Lawmaker on Virus Research: “I Don’t ..."
"The accused Capitol rioter who put his feet up on Nancy Pelosi's desk did an ..."
Mike Panic McEnany: “I Never Lied” in the ..."
Browse Our Archives
What Are Your Thoughts?leave a comment