The White House Responds to Petition to Remove ‘Under God’ from Pledge of Allegiance October 28, 2011 Hemant Mehta

Joshua DuBois, Executive Director of the Office of Faith-Based and Neighborhood Partnerships, sent out the following email today in response to the White House petition which said “Edit the Pledge of Allegiance to remove the phrase ‘Under God.’”

Thank you for signing the petition “Edit the Pledge of Allegiance to remove the phrase ‘Under God.’” We appreciate your participation in the We the People platform on WhiteHouse.gov.

The separation of church and state outlined in the First Amendment to the United States Constitution is an important founding principle of our nation. Our nation’s Bill of Rights guarantees not only that the government cannot establish an official religion, but also guarantees citizens’ rights to practice the religion of their choosing or no religion at all.

Throughout our history, people of all faiths — as well as secular Americans — have played an important role in public life. And a robust dialogue about the role of religion in public life is an important part of our public discourse.

While the President strongly supports every American’s right to religious freedom and the separation of church and state, that does not mean there’s no role for religion in the public square.

When he was a Senator from Illinois, President Obama gave a keynote address at the Call to Renewal conference where he spoke about the important role religion plays in politics and in public life.

A sense of proportion should also guide those who police the boundaries between church and state. Not every mention of God in public is a breach to the wall of separation — context matters.

That’s why President Obama supports the use of the words “under God” in our Pledge of Allegiance and “In God we Trust” on our currency. These phrases represent the important role religion plays in American public life, while we continue to recognize and protect the rights of secular Americans. As the President said in his inaugural address, “We are a nation of Christians and Muslims, Jews and Hindus, and non-believers.” We’re proud of that heritage, and the strength it brings to our great country.

So we now know that these petitions are useless.

I wasn’t expecting Obama’s staff to say, “Oh, right! That DOESN’T belong in the Pledge!” But c’mon, not even a little acknowledgment that this is a religious statement that is only said in public schools because of tradition? No reference to the fact that when the Pledge of Allegiance was originally written — by a Baptist minister, no less — it didn’t contain the phrase “Under God”? No sympathy for the non-Christian students who have to say this every day?

It doesn’t even address the legality of public school children saying we’re a nation “under God.” DuBois ignored that altogether.

Obama said “context matters” when it comes to mentions of god in the public square — and he’s right. That why it matters that children are told they must say they live in a theistic nation. If children were forced to say we live in “one nation, under no god,” Christians wouldn’t be taking this lightly at all. This isn’t about religion in the public square. It’s about the Constitution.

So Obama supports “Under God” under the pledge. Fine. I didn’t expect anything different. But don’t give us the rest of the politically correct bullshit.

Thank you for signing the petition “Edit the Pledge of Allegiance to remove the phrase ‘Under God.’”

President Obama doesn’t want to remove the phrase from the Pledge. And he doesn’t care whether or not it’s Constitutional.

Suck on that, Secular Americans. 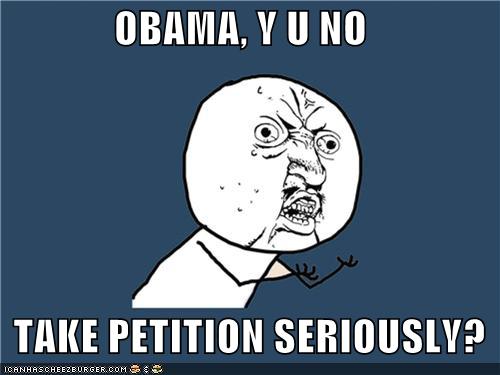 October 29, 2011 Brother Jed is the Centerpiece of This Awesome Group Photo
"Good! Let's hope they're able to make a difference"
CriticalDragon1177 “Humanists for Biden” Launches to Energize ..."
"Seriously, just stop wasting my time already. We all know what they really think."
Lindsay GOP Sen. Marsha Blackburn Repeats Lie That ..."
"Someone needs to inform Raper-t that those aren't the real Ten Commandments."
NOGODZ20 Senate Republicans Pass Useless Resolution Defending ..."
"https://uploads.disquscdn.c..."
CanuckAmuck “Humanists for Biden” Launches to Energize ..."
Browse Our Archives
What Are Your Thoughts?leave a comment