Non-Prophet Charity Week Draws Near in the UK

Over in the UK, the National Federation of Atheist, Humanist and Secular Student Societies (AHS) is gearing up for Non-Prophet Week 🙂 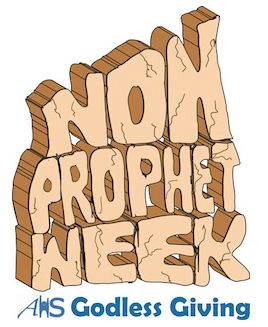 During Non-Prophet Week AHS societies are encouraged to raise and give money to charity (not that you’re discouraged at other times of the year!). This year we will be encouraging UK societies to raise money for Children In Need and Republic of Ireland societies to raise money for Barnardo’s. In addition, this year we want to place an emphasis on running blood donations and on joining the bone marrow and organ donor registers.

Awesome campaign and very worth charities. So far, 17 groups are signed up to participate and you can check out what they’re planning to do here. There’s still two weeks left, though, for more UK groups to join in the collective efforts.

Speaking of bone marrow donors, inspired by this post, I requested and received the donor kit in the mail (courtesy of Be The Match), swabbed the inside of my cheeks, and will be sending back the samples to see if I might be a match for somebody. It’s amazing that becoming a donor is that simple and yet so many people don’t do it.

Go request a kit and join the bone marrow registry.

October 23, 2011
An Atheist Asks How To Care for the Mentally Ill
Next Post

October 24, 2011 Significance Junkies
Browse Our Archives
What Are Your Thoughts?leave a comment