Sacramento Freethought Day will be celebrated in California this Sunday and, just as they’ve done in the past, organizers asked the Mayor’s Office and Governor’s Office to issue a Proclamation marking “Freethought Day.” 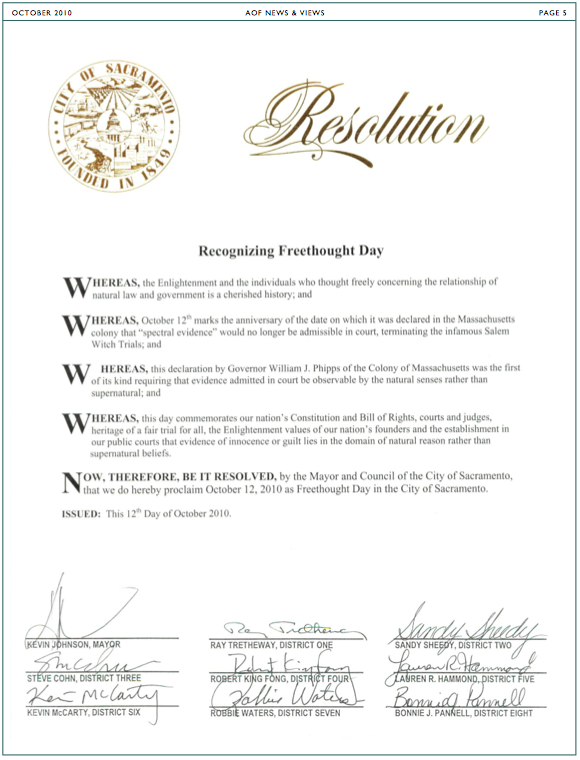 For some reason, though, Gov. Jerry Brown refuses to extend the same courtesy this time around:

… Brown’s office sent an email informing the group he would not issue a message for them.

“We’re very disappointed. This is a slap in the face,” said David Diskin, organizer of the Sacramento Freethought Day. “He supports National Day of Prayer but not a day that celebrates separation of church and state.”

This is yet another example of how atheists are treated differently from the religious, Diskin said. He believes their proclamation was rejected because many of them are atheists.

You just know they wouldn’t have hesitated if this were a Christian group.

The atheists plan to mark the rejection by displaying a collection of past proclamations… along with one empty frame, “symbolizing the one they did not receive from Brown.” Brilliant idea. Make sure Brown’s name is visible on the frame, too. That’ll make for a perfect little photo op.

October 22, 2011
You Can Teach Values and Ethics Without Religion
Next Post

October 22, 2011 Vote for the 2011 Bad Faith Award
"The worst example of any poster I've ever seen like that was reading-very briefly-Zero Hedge ..."
Dmar3 A Pastor is Doing Damage Control ..."
"Just remember that his folk will vote in 2022. They will also vote in 2024. ..."
JH Christian Pastor: Trump Will Be a Two-Term ..."
"No, lady. You ARE racist."
Kevin R. Cross A Pastor is Doing Damage Control ..."
"How dare you taunt us Americans for being exactly what we are?"
skinnercitycyclist Christian “Prophet”: The Military Will Soon ..."
Browse Our Archives
What Are Your Thoughts?leave a comment