Going Undercover at an Atheist Convention

Carolyn S. Briggs, a self-described “wobbly agnostic,” attended the 2011 American Atheists convention in Des Moines and has a lot to say about what she saw there.

I don’t know how seriously to take her, though, since she describes AA president Dave Silverman as “Jake Gyllenhall-cute”…

I don’t know about that. You can decide for yourself: 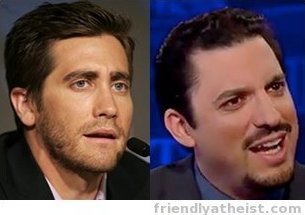 That aside, it’s a pretty enlightening read from someone new to this whole community:

I swallow hard and listen closer. We’ve been told this is the largest American Atheist convention ever and the audience is buzzing. A gauntlet has been thrown. David Silverman is not holding back. And it’s because he truly doesn’t believe. David Silverman knows there is no God, just as I always knew there was a God. Call us fundamentalists, the two of us. But here’s the difference: I am a reformed fundamentalist. I can now entertain the idea that my truth may not be the only truth. I want to understand, to listen and consider other people’s points of view, even when I find their convictions strange or frightening. That’s why I’m here. If I reject this group’s beliefs without understanding them, then I have not changed from the zealot I once was; But I’m nervous and feel a bit nauseous. I’m waiting for lightning that won’t miss this time.

The audience rises to their feet after this call to support the de-converted — the atheists are very supportive, I will say that. I lose count of the standing ovations throughout the convention. There is also much spontaneous laughter and many atheist jokes. Lot’s wife suffered a particularly cruel fate because she was on a low-sodium diet. One speaker ventures that 90% of the prayers in America consists of “Please, God, help me find my flip flops.” When a speaker screws up and apologizes to the audience, there is a chorus of “Jesus forgives you.”

She enjoyed listening to Greta Christina (“I wonder if she’s pissed off to have the last name Christina…”) and Jamila Bey, and she appreciated how much support the atheists offered each other and to the newly-decoverted.

It’s true that conventions are held to raise money for the host organization and preach to the already-converted, but they’re also a place to get inspired and fired up to do more, and to find out where we’re going and how you can help.

If that’s the takeaway a casual observer got, then American Atheists must have done something right. Looks like they’re not as bad as the media makes them out to be. Shocking, isn’t it?

October 20, 2011 There Are Some Brave Atheists in Foxholes
"https://uploads.disquscdn.c..."
bombcat Podcast Ep. 397: Interview with Dr. ..."
"Yes, but you weren't forced to get the COVID shot! Only then can you know ..."
JustAnotherAtheist2 Christian MAGA Cultist: COVID Vaccine Mandates ..."
"You spelled "eye" wrong."
JustAnotherAtheist2 Christian MAGA Cultist: COVID Vaccine Mandates ..."
"So she can see the future but the women down the street were witches? Interesting."
Shari CA Sec. of State Candidate: I ..."
Browse Our Archives
What Are Your Thoughts?leave a comment