The FFRF’s Controversial ‘Fool Me Once’ Billboard Campaign

The Freedom From Religion Foundation just began a new billboard campaign in Oakland, California that’s bound to upset devout Christians. They pull no punches and go right after delusional thinking — specifically the kind that leads you to believe Jesus is coming back one day.

Check out these new signs:

They’re also bringing back one of their older billboards: 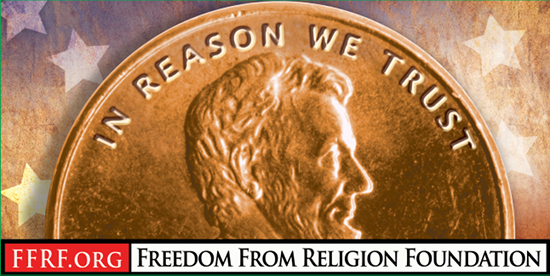 In its “fool me once” campaign, the Freedom From Religion Foundation is asking onlookers to use their judgment not just to reject Camping’s irresponsible predicts of “Judgment Day,” but all unsubstantiated religious claims.

FFRF’s message: instead of worrying about the unknown and unprovable, wasting time, money and energy in speculating over the nonexistent: “Make this world better.”

FFRF has placed five different bold messages on 40 billboards throughout Oakland, the home base of Camping’s Family Radio show, with two for good measure in San Francisco.

While FFRF is taking advantage of the publicity surrounding Harold Camping “end of the world” prediction this Friday, this isn’t just about him. Plenty of Christians mock or ignore Camping, but they still wrongly believe Jesus is returning.

Among respondents to the survey by the Pew Research Center for the People and the Press and Smithsonian Magazine, 41 percent said they expect Jesus’ Second Coming in the next 40 years, while 46 percent said it probably or definitely won’t happen.

I’d love to say that 41% of people are in for a disappointment, but I can’t.

Christians who believe Jesus is coming back just keep moving the Deadline back another few decades when it looks like their fairy tale won’t come true. They’re quick to tell you he’s coming back in their lifetime… and they’ll never admit it was all just a lie.

At least FFRF has no problem stating the obvious truth. Jesus ain’t coming back. It’s up to us to make this world a better place.