Once Again, I Don’t Support the Dismissal of an Anti-Gay Teacher October 17, 2011 Hemant Mehta

Once Again, I Don’t Support the Dismissal of an Anti-Gay Teacher

I feel like I just posted about this… but it’s happened again.

A Christian teacher at a public high school wrote about her anti-gay-rights bigotry on Facebook and people are calling for her to be fired.

When Jerry Buell did it, I defended him and argued that he had every right to say what he wanted… outside the classroom. For some reason, a lot of commenters here weren’t happy with that position. However, if we want to go after teachers who privately hold unpopular — and, in this case, reprehensible — views, then we have to brace ourselves for Christian groups who want to target openly atheist teachers as well.

When the evidence later showed that Buell preached his Christianity in the classroom, I supported his suspension. This was someone who clearly had no clue how to keep his private beliefs out of the classroom. He deserved to be punished (or fired) for that. 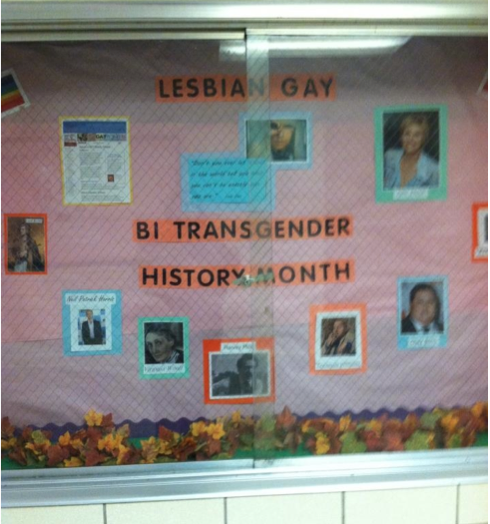 The teacher, Viki Knox, posted a photo of a display from the school, Union High School in Union Township, on her personal Facebook page last week. It included photos of Virginia Woolf, Harvey Milk and Neil Patrick Harris. When a friend asked if the school had really put it up, Ms. Knox wrote that it had, and “I’m pitching a fit!”

In subsequent posts, Ms. Knox, who teaches special education classes, defended her views in lengthy exchanges with other Facebook users, referring at times to God and her Christian beliefs. A copy of the comments was provided to The New York Times; her Facebook page was removed from public view…

In her Facebook posts, Ms. Knox wrote that while she had friends and loved ones who were gay, she believed that the way they lived was “against the nature and character of God” and that the high school was “not the setting to promote, encourage, support and foster homosexuality.”

You can see the entirety of her Facebook statements here (PDF).

When I heard this story, my first thought — once again — was: Who. Cares.

My second thought was: Why don’t any of these teachers know how to work the Facebook privacy settings? (Followed quickly by, Oh, right… no one ever knows.)

The only concern we should have is whether her bigotry followed her into the classroom. If it did, she deserves to be suspended or fired. If not, everyone needs to lay off.

That thinking didn’t permeate the offices of one civil rights group:

Members of Garden State Equality, a statewide civil rights organization that advocates gay rights, sent hundreds of e-mails and made phone calls to the district on Thursday demanding that Ms. Knox be dismissed because of her comments.

Steven Goldstein, chairman of the group, said, “If these Facebook posts are from Ms. Knox, she should not be teaching our children in public schools.”

The only question we ought to be asking is how this teacher treats gay students. Does she treat them differently from her straight ones? If gay students were getting bullied, would she do everything in her power to stop it from happening? (For what it’s worth, I treat my students the same regardless of their beliefs, atheists don’t get extra credit for sharing my views, and if I saw a student saying something derogatory about other students because of their faith or lack of it, that student would face my wrath.)

If you believe Knox shouldn’t be teaching in a public school, then you’re essentially saying no evangelical Christian should be allowed to work in one, either, because they all hold similar beliefs in regards to homosexuality. They may not all be dumb enough to post their bigotry online for the world to see… but it’s not like they’re any more “tolerant” of homosexuality. Should they be fired, too?

In case you’re wondering, the ACLU supports Knox, barring any damning evidence of her treatment of gay students in the school:

Edward Barocas, legal director of the American Civil Liberties Union in New Jersey, said in a statement, “Although we do not agree with the sentiments expressed on Ms. Knox’s personal Facebook page, her beliefs and comments are protected by the First Amendment.”

But Mr. Barocas added, “Because her postings raised questions about her conduct within school, the school district can and should investigate whether she is performing her job in accordance with school policies and the state’s Law Against Discrimination.”

You all know I will fight to defend LGBT students, especially in a high school setting. I know how much crap they have to deal with on a regular basis, and I’ll do anything I can to stop the bullying. I’m proud to wear a ribbon/button on the Day of Silence. If my school ever needed a Gay/Straight Alliance sponsor, I’d immediately sign up.

But I also believe people have a right to hold whatever wacky/irrational/harmful beliefs they want.

Just because you’re a public school teacher doesn’t mean you give up your rights to hold controversial opinions. All that should matter are things like how you do your job in the classroom, how you treat the students, how you contribute to your school’s climate, etc.

It’s entirely possible to be a Math teacher (who tries really hard to do a good job) who blogs about atheism in his spare time.

This editorial from yesterday’s Star-Ledger in New Jersey has it completely wrong:

While we all should be allowed an inner circle with whom we can speak freely, Knox gave up those protections when she posted her comments on the most public forum there is — the internet. She created a fearful, hostile environment for students. That’s unacceptable.

Knox has the right to a hateful view, but once her beliefs are made public, she doesn’t have the right to a taxpayer-funded, $70,688-a-year job in which she is expected to treat all students equally and with respect. She should absorb the harshest action possible, suspension or firing.

Knox is wrong. As a teacher, she must have tolerance. No student should be the target of prejudice by any school employees, especially teachers.

What irresponsible things to say. Everything I just put in bold in the editorial above — every one of those statements — is unsubstantiated. As of now, we haven’t heard from a single gay student who says Knox treated him with anything but respect and compassion.

Just because you are open about your beliefs in your private life (even on a public forum) shouldn’t be a reason for anyone to go after you at a public school — assuming you’re not mixing the two worlds. If you cross that line, then we have problems.

So for now, I can’t support the dismissal of Viki Knox. And you shouldn’t either. Unless we have evidence that she brings her bigotry into the classroom, she has no right to get punished for what she posted on Facebook.