Last year, I sent spies to an anti-gay-rights “academy” run by Americans For Truth About Homosexuality, a SPLC-certified hate group. Tonight, they’re having a banquet at the same location, the Christian Liberty Academy.

Early this morning, someone threw concrete bricks through the school’s windows in an effort to stop them from holding the event. The vandals have stayed anonymous, but they made a post taking credit for what they did on a random website. They also said they would continue the attacks tonight if the event went on as scheduled.

These chunks of concrete were thrown through these windows and doors for two reasons: to show that there is a consequence for hatred and homophobia in our community and to directly cause this event to be shut down. If this event is not shut down, and the homophobic day trainings do not end, the Christian liberty academy will continue to be under constant attack. 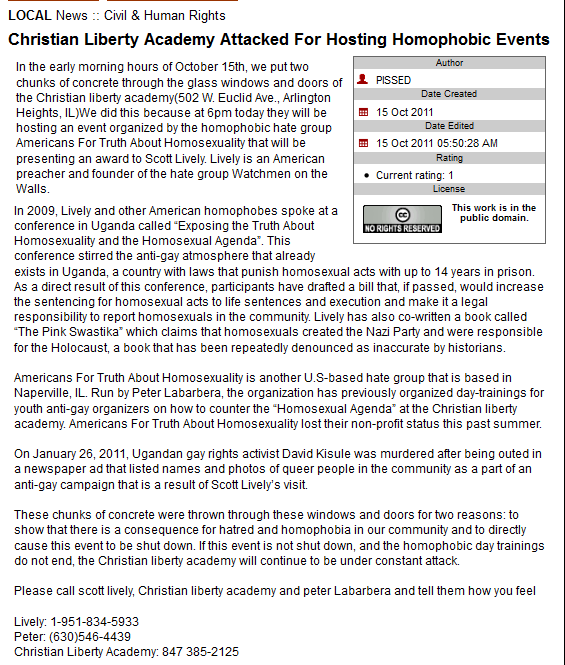 I don’t know who did this, but here are a few reasons it’s a profoundly stupid idea to have done this:

1) It won’t stop the gathering.

Not only will the anti-gay-rights Christians still gather, they’re now emboldened. more importantly, you’ll make casual observers more sympathetic to their cause. And that’s the last thing they need. They ought to be protested and ridiculed — they don’t deserve anyone’s sympathy.

2) They’ll use the vandalism to portray themselves as the victims.

This incident — with pictures and screenshots — will be used in every fundraising email/letter/blog post AFTAH sends out in the conceivable future. Hate groups are experts at turning the actions of the opposition into fundraising tools.

3) It sends a message that threats are the only way to stop their message.

You can’t shut them up, but you don’t have to. They have a right to meet and opponents have a right to protest outside the event. In fact, get Christians to speak out against what the hate group is promoting. They’re already losing the battle of public opinion — threats won’t make things better.

I realize there’s always a possibility that the whole thing was staged by Labarbera in an effort to bring more attention to himself and his bigotry, but I honestly don’t think he’d stoop that low.