Secular Students Sell Their Souls and Offer to Go to Houses of Worship October 14, 2011 Hemant Mehta

The students at Wayne State University’s Secular Student Alliance in Michigan auctioned off their souls a couple weeks ago and it was worthy of news coverage.

More specifically, the students said they’d go to a house of worship for anyone who purchased a soul.

During the soul auction, most students walked by the SSA’s table with indifference, often giving them questioning looks. Curiosity was the prevailing attitude among those who stopped.

A student who walked faster when confronted with the group, as if she were running away from them, refused to comment about her thoughts of the alliance. “It’s strange,” she said, as she kept walking.

In other words, a lot of students had this look: 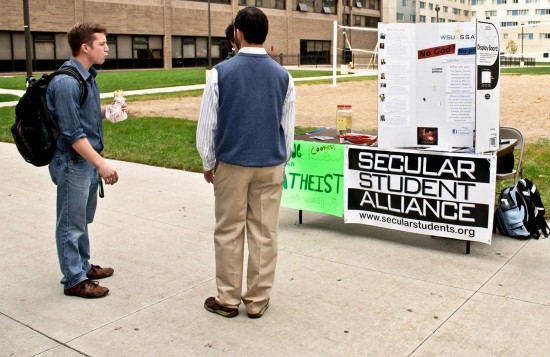 [Founder and president Hassan] Khalifeh said the SSA gets mixed responses from students during events. However, the group has been subjected to abuse, as its flyers have been torn down and its members have received emails harassing them, according to Khalifeh.

“Some people are very intolerant to others’ ideas,” he said. “That’s why confidentiality is very important in our group. We don’t reveal members’ names because it might hurt their lives and relationships with family and friends. You don’t have to sacrifice yourself for the cause.”

If you look through their Facebook pics, you can see a couple of the awesome ways they’ve promoted positive atheism, like Ask An Atheist and Hug an Atheist.

This is how you do it. You start a group, gather some like-minded people, and then show strangers you’re not as bad as their pastors and parents made you out to be.